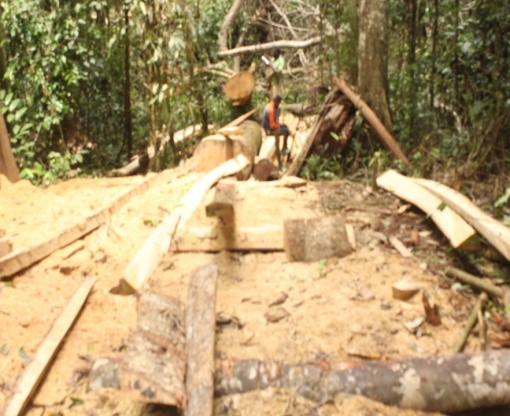 Mere
Dreams are just dreams but dreams with vision are real dreams. When God smiled
in Genesis giving man dominion over what he has created, he made man have a
focus to manage his resources and sustain his life. Man in appreciating the
work of God has gone further to use the knowledge given to him to make the
impossibility possible. Saving wildlife especially great apes in a human dominated
landscape in the Deng Deng National Park corridor is a tasks ERuDeF is engaging
in by using the God given knowledge to restructure and improve the life of man
by adding value to what is present to maintain his culture and let free the
endangered species.

The Major threats to wildlife identified in the
landscape are agricultural activities (hunting and logging).
These activities are threatening the survival of wildlife in the community
forest. Tales from the Deng Deng indigenes confirmed that all these threats are
old and have been part and parcel of man. Thus these activities have affected and
are affecting the primates, ungulates, carnivores and rodents in the landscape.

Hunting activities carried out here include the
use of guns and snares. Gun sounds are heard throughout the community forest at
close proximity to the settlement. Used cartridges are found in the forests
close to settlements.  All wildlife
species are victims to the guns and thus this is very dangerous to the survival
of wildlife. Snares were also identified throughout the forest and were mainly
for ungulates and rodents with species such as yellowed franked duiker, blue
duikers, porcupine and pangolin the greatest victims. These species are
dominant in local restaurants in the Deng Deng village. The African civet is
also very common in local restaurants, indicating that the species is also very
vulnerable to hunting activities.

There is rampant illegal logging in the forest.
This seems to be the greatest threat to the survival of wildlife in the area.
Logged woods are found in different zones across the landscapes from Mansa through
Hona to Deng Deng village. These woods are harvested and transported through
head load to accessible roads where there are then loaded in trucks to the city.
Thus, this is one of the greatest threats to biodiversity in general and
wildlife in particular. Logging and farming are the main sources of habitat
fragmentation and degradation.

With these human activities which man is using
to survive in the corridor and unknowingly degrading and fragmenting the
habitats of great apes, ERuDeF is aiming at restructuring, shaping and
improving the lives of man in the corridor while protecting the remaining
population of great apes (gorillas and chimpanzees) by ensuring their free
movement from the Deng Deng National Park to the Dja Biosphere Reserve.