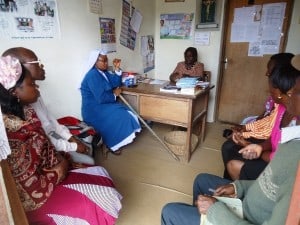 Over fifty environmental clubs have been created by the Environment and Rural Development Foundation (ERuDeF) Education for Sustainable Development (ESD) team in schools within the Lebialem Highland Conservation Complex (LHCC). The clubs were created within the 2014/2015 academic year for effective environmental protection and biodiversity conservation awareness campaign in schools and communities in and around the LHCC.

This was the outcome of an assessment carried out by members of the ESD team at the start of the 2015/2016 academic year. The clubs, whose main activities include the exchange and dissemination of information on the importance of environmental protection, were established in government, mission and lay private institutions within this biodiversity hot spot

“The main activities of the club during the 2014/2015 academic year were the planting of trees around the campus for beautification and sensitization of the students on the importance of wildlife protection,” said Patrick Tanwarong, Coordinator of the Agro-Veterinary Club of Seat of Wisdom College, Fontem.

Tanwarong appreciated the efforts put in by the ESD team that provided financial, material and technical support, which he said helped them in planting trees last year on their campus. He expressed the need for more innovative activities this academic year.

For his part, the Principal of the college, Clelia Fervani, reiterated the importance of environmental protection to the students especially as they are likely to be conservators in the future.

Welcoming the ESD evaluation team to his college, the Vice Principal of the new Youth Technical and Commercial College in Fontem, described the visit of the team as a booster to the efforts his institution has been making in the area of environmental protection.

“Though our college is new, we had already begun planting some trees around the school at the start of the academic year. We hope that ERuDeF’s intervention will make true our desire to have a completely green campus by the end of this academic year,” said the Principal.

At the Standard Nursery and Primary School Menji, the ESD Coordinator, Samuel Ngueping, lauded the pupils for investing time for an ever-green campus.

“Despite their relatively young ages, these kids still found time to engage in tree planting activities on their campus. I think this is something we must encourage,” Ngueping said after inspecting some of the trees planted in the school last year.

“We are going to initiate sporting activities for conservation, arts and craft competitions amongst the various club members. Frequent excursions to some eco-touristic site, tree planting and nursery creation will also be carried out. Our whole objective is to make Lebialem Division a veritable reference point in the area of environmental protection,” Ngueping added.

He praised the efforts of the out-gone ESD team, notably Akeh Nug and Ndip Emmanuel whose dedication he said led to the creation of all the environmental clubs in the various schools in the Division.