Extension of Threatened Trees project to other Cameroon Mountains eminent 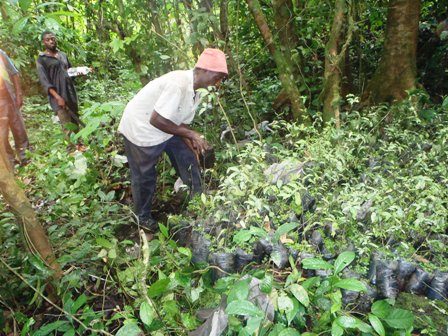 Threatened Trees in Cameroon Mountains in dire need of regeneration

The Environment and Rural Development Foundation (ERuDeF) is mapping out strategies for the extension of Threatened Trees Project to other mountains in Cameroon beginning with Mt. Oku.
Threatened Tree project seeks to protect and restore the populations of IUCN red listed trees in the Cameroon Mountains through independent actions of local institutions. Launched in 2011, the project which has been operational in Mt. Cameroon has culminated in the planting of some 20000 threatened tree seedlings in the Mt. Cameroon National Park borders and in degraded Community Forests, to restore their populations in the wild. These species include Zebrawood(Microberlinia bisulcata), Tiama (Entandrophragma angolensis), Sapele (Entandrophragma cylindricum),Azobe (Lophira alata), Pygeum(Prunus africana) Peace plant(Dracaena Buena),Macroberlinia bracteosa, Iroko(Milicia excels), country onion (Afrostyrax lepidophyllus),drummer stick (Cordia platythistera). Law enforcement was equally intensified, which led to a 35% decline in illegal logging of the species in the area.
It is due to these successes and the change in mindset of the local institutions towards threatened tree conservation that ERuDeF is extending efforts to other mountains, beginning with Mt.Oku Plant Life Sanctuary. The IUCN red listed species in the area include; Newtonia camerunensis(CR), Dactyladenia johnstonei(CR), Oxyanthus okuensis(CR), Ternstroemia polypetala(EN), Habenaria obovata, Acanthus montanus(LC), Crotalaria mentions(EN).
ERuDeF is currently designing an approach to restore the populations of these highly endangered species and the entire indigenous forest of Mt. Oku. The approach, which will be shared with partners/funders and the extension project hopes to commence by 2019 if some funds are secured. If this 15year project materializes, not only will the populations of at least 500.000 threatened trees restored but the livelihood of the local communities will be enhanced and at least 100.000ha of the forest land will be restored.
By Tengem Adeline