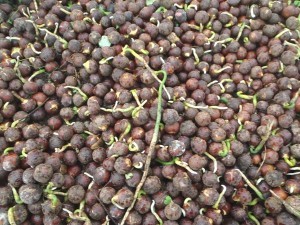 In an effort to restore the population of the threatened plant Afrostyrax lepidophyllus, a team from the Environment and Rural Development Foundation (ERuDeF) has collected over 2000 seeds of the plant commonly referred to as “country onion”. These seeds were collected at the Mt Cameroon area precisely at the foot of the Mt Etinde, a volcano situated on the southwestern flank of the large Mt Cameroon. Seeds of this species were collected in mid- July by a team of Foresters working for the Mt Cameroon threatened Trees Project supported by UK Charity Fauna and Flora International (FFI) under the Global Tree Campaign Program. The seeds would be propagated at the ERuDeF Central Tree Nursery in Buea and in the recently created community nurseries in Bafia, Bakingili, Bomana and Bova I. They will later be distributed to the communities for planting in their farms. It is hoped that through this initiative, not only will threatened tree species population be restored, but the incomes of these communities will increase as the seeds which are used as a condiment will be harvested and sold by these communities to generate income. “Country onion” as this plant is locally called is a sought after product used in the Cameroonian and Central African cuisine. It is a condiment used to prepare many sumptuous and popular meals such as “Ekwang”. The aroma gotten from this ingredient always leaves many wanting for more.

Every year during the months of July and August when the afrostyrax lepidophyllus starts fruiting, ERuDeF staff working for this project go to the foot of the mountain to collect the seeds. Not even the rains this year could stop the team as they went about collecting the seeds.

The Afrostyrax lepidophyllus was first identified at the foot hills of the Mt Etinde during a threatened tree survey in 2007 after several failed attempts. Since its identification, ERuDeF has been collecting them and propagating them in nurseries. This year, a community member Ekwalla Samuel joined the team and served as a guide into the forest. Upon identification of a tree, the team spread around the bottom of the tree searching for the little brown seeds on the forest floor. These seeds were not easily distinguished given the dark nature of the forest, however, looking keenly these little brown seeds were picked.

Afrostyrax lepidophyllus is a species of plant in the Huaceae family. It is found in Cameroon, Gabon, and Ghana. It is threatened by habitat loss. The bark extract of Afrostyrax lepidophyllus has shown pesticidal activity against nematodes and arthropods, including insecticide-resistant strains of lice and blowflies. They are found in areas of wet evergreen forest. Their major threats include forest conversion into a commercial plantation and in some cases mining activities has destroyed areas of forest. According to the IUCN Red List Classification, this plant is vulnerable. 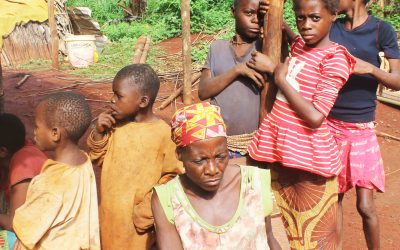 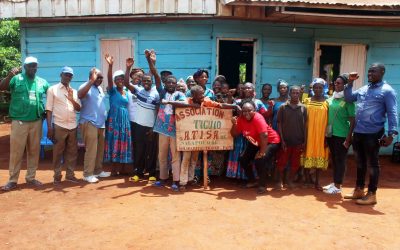