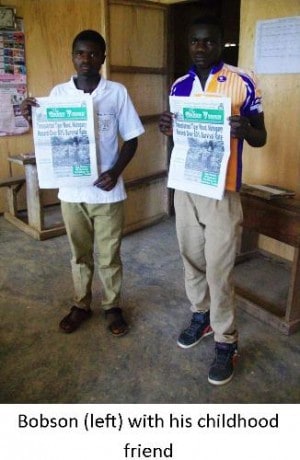 After spending the better part of his childhood and teenage years hunting animals in the Proposed Mak-Betchou Wildlife Sanctuary in Lebialem, Bobson Achia Tajouck decided to return to school after. He is currently a form four student at Government Technical College GTC Abebue.

Bobson was born and raised in a typical hunting community of Abebue, Bobson says he began his hunting in the proposed sanctuary at the age of nine.

“It was a competition between me and my friends during our days of primary school. We would move into the forest in groups and with dogs, guns, machetes and other weapons. The person who brought home the greatest kill or the biggest animal was often revered as a great hunter in the village and commanded a lot of respect,” recalls Bobson.

The teenager says often returned with monkeys, leopards, deer and other animals some of which they did not even know their names.

“Sometimes we would kill some of these animals and roast them in the forest especially when we suspected that our parents may require us to hand the animals over to them for sale. I often boasted amongst my friends because each time I got into the forest promising to bring home a monkey or a leopard, I always did,” Bobson says.

After attempting the Certificat D’Aptitude Professionel (CAP) and failing in 2014, Bobson quit school and became a full time hunter. A year later, he was back in the classroom.

Bobs, as his friends call him, recounts that between 2013 and 2015, he went hunting at least three times a week usually with very huge kills.

Bobson now takes pride in having stopped hunting and says he now knows why most youths of his community end up as hunters, trappers and petty farmers.

“It is all about ignorance and the wrong impression that hunting can guarantee a bright future for them,” says Bobson.

As regards his plans for the future, Bobs says he desires a vibrant career in accounting or business or any other related field.