The Lebialem Highlands, located in Cameroon’s southwest, is a global biodiversity hotspot, a place long protected from development by its ruggedness and small human populations, though that is no longer true. This area is heavily influenced by drainage patterns and topographical features. It has been observed that the cross-border area is floristically diversed when compared to other forests in the Guineo-Congolian region (Terry et al, 2003). The Highlands stretch from the western flank of Mount Bamboutous across the Bamilike Plateau, and rise from near sea level in the Bechati area to 2,500 meters (more than 8,000 feet) in the Magha area in Bamumbu village. The Highlands’ dense, lush rainforests have been blessed by four flagship species, three of them primates: the Critically Endangered Cross River gorilla (Gorilla gorilla deilhi) of which less than 300 remain in the wild; the Endangered Nigeria-Cameroon chimpanzee (Pan Troglodytes ellioti), the most threatened of chimp subspecies likely numbering fewer than 6,000 individuals; the drill (Mandrillus leucophaeus); as well as the Vulnerable African forest elephant (Loxodonta cyclotis). This area contains 84 % of known African primates, 68 % of known African passerine birds and 66 % of known African butterflies 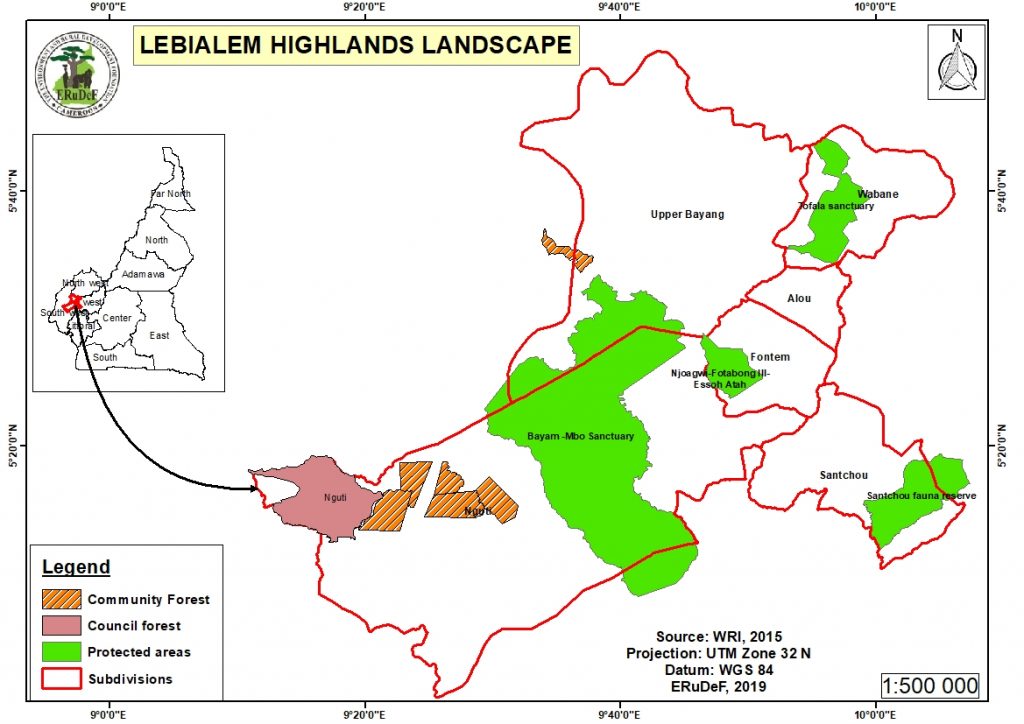 Programs in Lebialem highlands by Departments

The Department of Conservation Programs in Lebialem

The historic entrance of ERuDeF into the great apes conservation in the Lebialem highlands started in 2004, when she discover another sub population of the cross river gorilla in what is known today as the Tofala hill wildlife sanctuary. Since then, research efforts led by ERuDeF have resulted to creating the first distribution map of great apes in the Lebialem highlands in 2010 with focus on cross river gorillas and the Nigeria Cameroon chimpanzees. The cross river gorillas and the Nigeria Cameroon chimpanzee are located in the THWS, MBWS, and Tofala-Mone Wildlife Corridor. Since 2010, ERuDeF launched conservation efforts to provide long term protection of these great apes species populations. These have led to the creation of the THWS in 2014 and currently concluding the process for the creation of the proposed MBWS (4000ha). Additionally, ERuDeF has secured the protection of 30000 ha of wildlife corridor linking THWS and the Mone Forest Reserve to serve as a genetic corridor for the cross river gorillas in the Tofala Hill Wildlife Sanctuary and greater Takamanda National Park. ERuDeF is also currently supporting efforts to link the Bayang-Mbo Wildlife Sanctuary (69145ha) to Santchou Game Reserve 7000ha through Mak-Betchou Wildlife Sanctuary and a series of interconnected corridors of community reserves amounting to 7000 ha. ERuDeF vision in this landscape in the next fifteen (15) years is to consolidate the management of a system of protected areas and corridors to support the long term conservation of great apes using collaborative management approach. In these highland before the end of this 15 years, according to the ERuDeF Director of Biodiversity and Protected area creation, a total surface area of 130,482 ha will be collectively protected involving 88,225 ha of protected area (Tofala hill wildlife sanctuary 8080 ha, the proposed Mak-Betchou Wildlife Sanctuary 4000 ha, the Bayang- Mbo Wildlife Sanctuary 69,145ha and Santchou Game Reserve 7000ha) and  42,257 ha of corridors in the form of community forest (Tofala-Mone Corridor (25,000ha) linking Mone Forest Reserve to the THWS and the Bayang-Mbo, Mak-Betchou and Sanctchou corridor with area of 17,257 ha) will be effectively manage to secure and ensure genetic connectivity and migration among species. This will lead to the protection of 60 cross river gorilla sub population, 1000 Nigeria-Cameroon Chimpanzees, 200 African forest elephants other IUCN Redlist species such Drills, Preuss’s monkey and many species of birds, amphibians and reptiles. ERUDEF in other to improve on the sustainable management of biodiversity through human welfare development and reduction of human pressure on key biodiversity targets in the Lebialem landscape, she envisage to invest ten (10) billion frs CFA to support community development projects within the.

This programme seeks to save the last globally threatened species of biodiversity through research and bio-monitoring in the range habitats. Keys species of interest include but not limited to gorillas, chimpanzees, elephants, drills, amphibians and birds across Cameroon.

ERuDeF through the above programme has improved knowledge on wildlife population status in Tofala and Njoawi Fotabong III Essoh-Attah. The organization has also documented detected changes in anthropogenic activities in the Tofala Hill Wildlife Sanctuary and the Njoawi Fotabong III Essoh-Attah. The organization wants to acquire quantitative information on the population status and distribution of apes and other wildlife in this landscape. Equally, provide efficient source of identification for apes and other wildlife available as well as ecological information, identify changes in human activities over time in the landscape.  In March 2018, 20 chimpanzees where recorded in a single group. That is the largest number of Nigeria Cameroon Chimpanzee ever recorded in the same group in the wild.

This programme seeks to reduce anthropogenic threats, increase biodiversity population and promote environmental sustainability through mobilization, education and training. This programme has been well implemented in the Lebialem Highland Conservation Complex. it aims to create the social context within which ERuDeF can achieve its conservation objectives. The main objective is to sensitize and reinforce the capacities of stakeholders in the region on managing biodiversity (School and community environmental Education)

ERuDeF have been conducting environmental education in this landscape for the past 15 years with support from Tusk trust, Taiwan government, Man and Nature and many other partners.  We have successfully constructed permanent toilets for two schools around the proposed Mak-Betchou wildlife sanctuary. We have also donated books to schools and support school fees for the orphans and poor under privilege children around the area to be protected. More so, ERuDeF with support from partners has supported public information system through the green vision news paper, online publication, community radio programs and flyers. These have change the mindset of the people on good environmental practices and the importance of conserving this unique species and their habitat.

Achievements under this program

This entails sensitisation, advocacy and development in rural communities adjacent to protected areas. Students and pupils show a positive change in knowledge gain, change in attitudes pledging their continuous support, change in attitudes and in spreading the conservation message to their siblings, parents and communities at large. Community members are now in most areas practicing sustainable agriculture. Wildlife nature art and craft workshop organized in schools, Sensitization of population of the area on the stakes of conservation through radio programme and newspaper and training of teachers on conservation education have together help in the management of the Wildlife Sanctuary.

Get in Touch. Get Involved.

We will love to hear from you.