The Department of Conservation

The Department of Conservation has as mission to promote the long term conservation of threatened biodiversity in Africa.

The department seeks to safeguard globally threatened species through, biodiversity research, environmental education and creation and effective management of protected areas within the African continent.

This programme seeks to save the last globally threatened species of biodiversity through research and bio-monitoring in their range habitats. Key species include of interest include but not limited to gorillas, chimpanzees, elephants, drills, amphibians and birds

The programme seeks to support the effort of the government of Cameroon to create and manage a system of protected areas across key biodiversity areas of Cameroon.

This programme seeks to ensure genetic connectivity between protected areas

Saving the endemic birds of Cameroon and protecting their environment

ERuDeF has put in place a Landscape Based Approached for the effective conservation of species in their range habitat. These include the Lebialem Highland Conservation Landscape, the Bamenda Highlands Landscape, the Tchabal Mbabo Mountains Landscape, the Deng Deng National Park and Dja Corridor Landscape and the Megeme Gorilla Sanctuary. All of these sites are hot spots for biodiversity conservation. This is a 15 years initiative with three phases of 5 years each. Different landscapes have different projects and interest which are monitored and evaluated quarterly, half yearly and yearly. 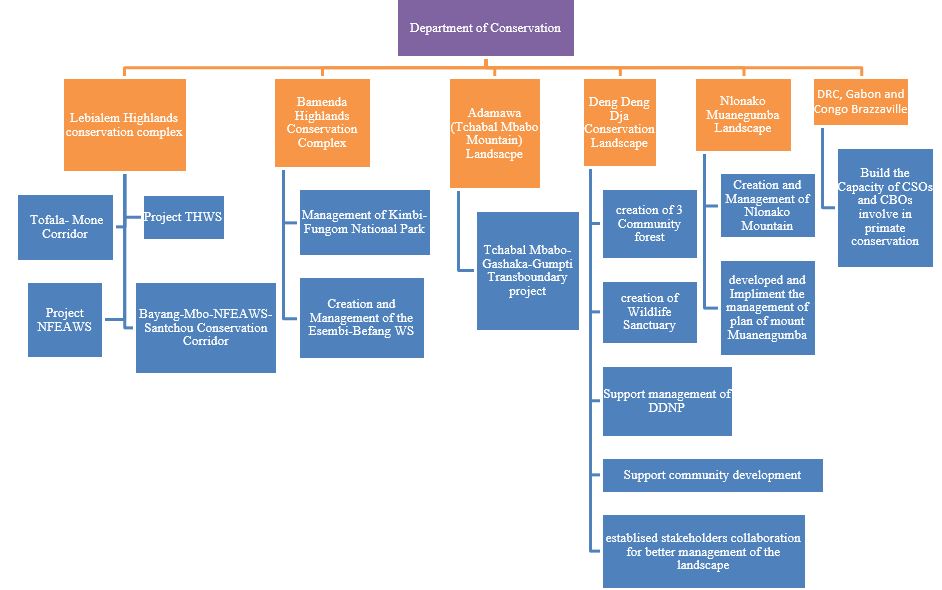 Description of Landscapes and Projects running in each landscape

ERuDeF has been working in Cameroon for the past 20 years to conserve wild habitats through creation and management of wild habitats.

ERuDeF was part of the consortium of partners that supported the government of Cameroon in the development of the management plans of respectively the Deng Deng National Park in 2015 and Mt Cameroon National Park in 2014. ERuDeF also contributed to restore the population of Microbelinia bisiculata (Zebra wood) in 2016 on mount Cameroon.
2014-2016
2016-2018

To help allow genetic connectivity among species, ERuDeF is supporting the creation of ecological corridors in the Southwest (Tofala Mone, 2017) and East regions of Cameroon 2019.
2017-2019

Tofala-Mone project have successfully build the capacity of over 40 community members from Etoko, Egbemo, Tofu, Bakumba,  Ayukaba, Chinda, Kendem and Bokwa on forest watcher application installed in Smartphone to monitor deforestation in the community and state forest.

Tofala-Mone East corridor rainforest community conservation project has successful created 4 communities In the Lebialem Highlands and precisely in the Tofala-Mone corridor.  The community forests created in the landscape serve as a genetic corridor linking the cross river gorilla of the Tofala Hill Wildlife Sanctuary to those of those of the Takamanda National Park through the Mone River.

Get in Touch. Get Involved.

We will love to hear from you.