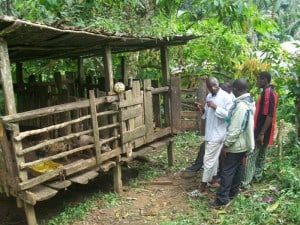 The people of Bangang have benefited from the largesse of French charity organization Man and Nature through ERuDeF’s Net Positive impact (NPI) project. The coordinator of EruDeFs’ livelihood program recently handed the consignment of beehives and piglets to the Chief of Bangang, Fon Folah III, in the presence of the entire community. The items will serve as alternative sources of income to bee farmers, hunters and trappers who depend solely on the forest for livelihood.

Bangang is one of the eleven villages of the forest adjacent communities to the newly created Tofala Hill Wildlife Sanctuary (THWS) gazzetted by a Prime Ministerial decree number 20145212 of September 29, 2014 with a surface area of 8087 hectares. The Tofala Hill Wildlife Sanctuary is situated between longitude 598006m-609830m and latitude 615778m and 634006m in the Lebialem Highland Conservation Complex of South West, Cameroon.

While receiving the items, Fon Folah III cautioned ERuDeF Livelihood team that they should put human being at the fore front in their conservation efforts. As the saying goes “Conservation cannot be done on and empty stomach” and according to him in protecting the wildlife population, more attention should be on humans (70%) and 30% can be paid to the animals.

On behalf of his people, the Fon requested that ERuDeF install at least two small oil mills in Bangang.

According to him, it will be a great sign of relief to the entire population which at moment depend on the traditional milling methods. He further told the ERuDeF livelihood and economic development team that palm oil is the major economic activity of the people in this village. Meanwhile there are other livelihood needs like fish farming, improved palm species, pipe borne water amongst others

The president of the Bangang bee farmers and trappers association in the person of Odenis Tambi in receiving the beehives and piglets on behalf of the association thanked Man and Nature through ERuDeF for the gesture and lauded their support to ERuDeF for the conservation of wildlife species in the entire Lebialem conservation complex.

Speaking on behalf of the association, Tambi promised that the items received will be put into proper use and the association is going to produce the highest honey in Tofala coupled given the fact that his group had earlier on in 2014 received intensive training on bee farming, honey production and livestock breathing.

The coordinator of ERuDeF’s livelihood program thanked the Bangang community for their collaboration, he advised them to make proper use of the item and more will be donated to them depending on the impact the donated items have on their lives. Furthermore, he called on the villagers to count on ERuDeF for more livelihood support especially now that the Tofala Hill Wildlife Sanctuary has been officially created. The donation process ended up with a lot of optimism from the entire community; the villagers through their Fon pledge their utmost support to join ERuDeF in their conservation efforts.