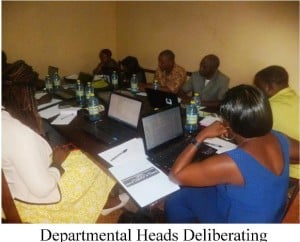 Directors of different departments of the Environment and Rural Development Foundation (ERuDeF) have been encouraged to keep up their enormous efforts in contributing to the overall success of the organization. The call was made by ERuDeF President/CEO Louis Nkembi, at the end a two day meeting at the ERuDeF Institute of Biodiversity and Non- Profit Studies (ERuDeF Institute), July12 to 13, 2016.

The meeting was aimed at reviewing the activities of last semester of each department of the organisation and making projections for the future. Each Head of Department presented a semester reports containing a review of last semester and a preview for the next five years.

According to the CEO, ERuDeF is undergoing real transformation in meeting with international standards. While thanking the directors for their shared efforts this far, he encouraged each Departmental Head to coordinate activities at their respective departments so collectively greater achievements will be made.

Louis Nkembi thanked the directors for contributing towards the success of the organization. He told them since the Organization is undergoing transformation, polices will keep changing. He explained that the changes were imperative to upscale the organization to expected heights.

“These changes are not to punish staff but to make the NGO more effective, accountable, efficient and visible to all” Mr. Nkembi added.

During the meeting, each Departmental Head took turns to present work covered for the last six months. They focused on the objectives of the programmes, activities earmarked and successes recorded.

The presentations indicated that ERuDeF is steadily breaking grounds in its vision of protecting the environment, conserving biodiversity and bringing about sustainable development to local communities.

However, some of the activities envisaged at the beginning of the year were not achieved because of challenges in the field like poor climatic conditions and little or no collaboration from some farmers amongst many others 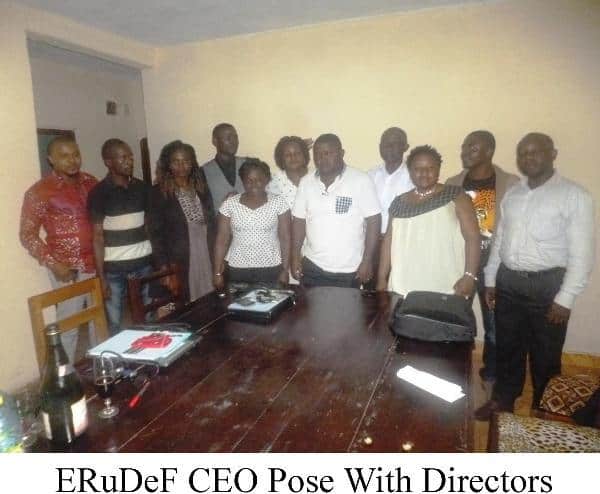 Reacting to the challenges, the CEO insisted that realistic solutions be suggested to solve the problems and forge ahead. He called on directors to stay on top of challenges.

“The Organization has key initiatives to push through so it is time to re-strategize to move forward. It is challenging yet possible. Periods of tribulations do not mean give up but rather focus attention and make an everlasting construction. Every experience gives us an opportunity to learn and move forward,” Louis Nkembi said.

On his part, the Senior Director of Operations, Charles Tangie emphasized the importance of a collaborative work force to build a better ERuDeF, which will continuously play the role of a leading conservation NGO.

“The tempo is high and much is needed to reach that standard. We all are a chain; one missing link can be disastrous”, Charles Tangie said.

The Director of Wildlife, Allen Enokenwa Tabi on his part underscored the need for collaboration amongst staff.

“Working in isolation will slow the realization of the organisation’s mission. All must work collaboratively” he stressed.

At the end of the meeting, the Louis Nkembi said the organization is a performance-based NGO and so there is the need for staff to top-up their degrees/qualifications.

The ERuDeF Boss opined that rising to the top and appearing in the spotlight entails a lot hence, refining skills and methods is very essential.