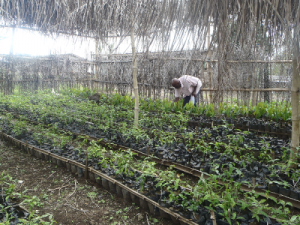 The Environment and Rural Development Foundation (ERuDeF) has supported the establishment of 5 5000 capacity community nurseries in some communities around the Mt Cameroon. Some of these communities include Bafia, Bakingili, Bomana and Bova I. “The aim of this move is to ensure the conservation and sustainable management of some globally threatened trees of the Mount Cameroon forest” says Louis Nkembi, CEO of ERuDeF. Some of these trees include the Microberlinia bisulcata, Oncoba lophorcarpa, Cordia platithystera and the Prunus african.

In partnership with the Ministry of Forestry-Mt Cameroon National Park Service, ERuDeF is currently training community members on the identification of these threatened species and basic nursery practices. The initiative which was welcomed by the inhabitants is now gaining grounds. Community members now construct nursery sheds, fill polythene bags and collect seeds from the forest for the nursery. Thereafter, these communities would plant the threatened species in their farms. It is hoped that these trees would not only contribute towards minimizing the carbon in the atmosphere and fight global warming, but subsequently serve as a source of income for in terms of furniture derived from the wood.

Mount Cameroon it would be recalled is one of Africa’s largest volcanoes. This Mountain locally referred to as “Efasa moto” meaning “the Chariots of the gods” is the highest peak in sub-Saharan western and central Africa, rising to 4,049 metres above the coast of West Cameroon. This Mountain stands tall in plant and animal biodiversity. It is home to plants that are not just endemic to the region but equally threatened. Unfortunately for some time, human pressure on this mountain such as indiscriminate logging and creating of farmlands has put some plants under threat. It was in line with this that the Cameroonian conservation organization, ERuDeF designed the Mt Cameroon threatened trees project with a goal to restore globally threatened trees. Supported by Fauna and Flora International (FFI) and the Global Tree Campaign, this project has identified some 17 species within the Mt Cameroon area which are highly endangered. Amongst these species identified, ERuDeF set up a central tree nursery at the Regional Delegation of Forestry to premises of Buea where 7 of these species are currently being raised. Creating community nurseries is therefore an effort to indulge the communities more in tree planting, given that nature can best be taken care of by those who live