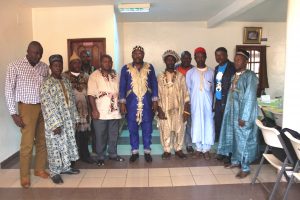 Traditional rulers pose with ERuDeF staff and partners after workshop

This Association was created, April 19, 2018 during a constituent General Assembly that took place in Bafoussam, West Region of Cameroon under the auspices of the Environment and Rural Development Foundation (ERuDeF).

Bringing together traditional rulers of some three villages within the Mount Bamboutos Area the Regional Chief of Service for Forestry at the West Regional Delegation of Forestry and Wildlife, staff of ERuDeF and representatives of Groupement Autonome pour le Developpement Durable (GADD) and African Center for Renewable Energy and Sustainable Technology (ACREST), the ERuDeF CEO/President Louis NKEMBI, underscored importance of the an association of traditional rulers within Mount Bamboutos in the restoration of the ecosystem. “You are the custodian of the land and the restoration of the Mount Bamboutos landscape can only be effectively realised if you (traditional authorities) are actively involved in the project” Mr. Nkembi said. 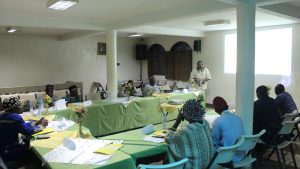 Participants at workshop for MBFA creation

On his part, ERuDeF’s Director of Forestry, Herman Deh Nji exposed the traditional rulers to the odds that have befallen communities in and around the area thanks to the depletion of the Mountain. Some of these included low agricultural productivity, water shortages/poor water quality, erosion and deadly landslides, disappearance of some biodiversity species, draught and flooding amongst others.

This caught the attention of the traditional rulers present culminating in the creation of the Mount Bamboutos Fons’ Association with an Article of Association adopted pending some corrections. Meanwhile the Bangang Fon’s palace in Bamboutos Division, West Region of Cameroon was unanimously selected to be Head Office of the Association, but could be changed if need be.

At the end of the General Assembly, the Fon of Bangang, HRM Momo Keubou, was nominated and unanimously acclaimed as the Acting Chair of the Association. The Pioneer Chair MBFA was excited with his new position giving that the goal of the Association ties with his environmental vision.

“I very grateful for the confidence given me to lead this great association. Environmental Protection to me is a passion. When I ascended to the throne two years ago, I made environmental protection my top priority, most especially the Mount Bamboutos area and in collaboration with ACRES, we have instituted trees Day. When the idea of creating this association was introduced to me, I welcome it with gladness because it was in line with my aspiration. The well being of our population is dependent on the wellbeing of this Mountain and the Wellbeing of our people is our joy. So my colleagues and I will put in our best to ensure the success of the project for the restoration of this degraded mountain” he promised.

The creation of MBFA was greeted with great joy by the traditional authorities giving that it makes make them and their communities fully involved in the process of restoring Mount Bamboutos. “I want to thank ERuDeF and her partners for involving the local communities in the execution of projects around that area. We have been protecting the Mount Bamboutos area spiritually but the landscape has remained degraded. We now have an understanding of the road map for the restoration of this area. When we get home, we will talk with our communities members farming this area, sensitise them to start preparing their mind so the project can go on successfully when implementation on the ground commences,” the representative of the Fon of Bamumbu, Lekunze Isaac said.

Chief Forka of Agong-Bamumbu was particularly motivated by the environmental benefits that will accrue from the restoration of this Mountain.

“Planting trees will improve on the flow of water in our communities. Springs and streams are drying and I will be very delighted if trees are planted to bring back water to our communities,” he stated.

The President of Bafou North Chiefs Conference, Chief Tsamo Westoer, was particularly concern the type of trees to be planted in the Mount Bamboutos area. “ I am comfortable with the fact that the trees to planted will be economic trees like pear, plums etc. I think it will also be great to include agroforestry tree species that can fertilise the soil like Acacia, water friendly plants like the raphia palms and medicinal plants like Prunus africana,” he recommended.

The creation of the Mount Bamboutos Fons’ Association is within the framework of the French Funds for Global Environment – Small Grants Programme (PPI 5 project), funded by the International Union for Nature Conservation (IUCN) French Committee.