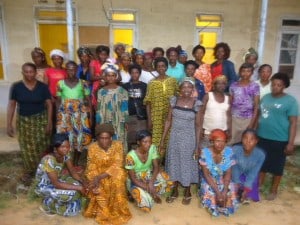 Women residing in and around the Nkongho-Mbo Area in Nguti Sub-Division, Kupe Muanenguba Division of Southwest Cameroon, have welcomed the initiative to create acooperativein their area. They accepted the initiative recently during a sensitisation and mobilisation outing by the Conservation Finance Officer of the Environment and Rural Development Foundation (ERuDeF), Mr Njang Quddus. The sensitisation meeting brought together inhabitants of Mbemfe, Ngientu, Nzeleted, Lebock, Lebeh, Njungo and Fonki villages, who unanimously agreed to call the cooperative, the Nkongho-Mbo Women Cooperative Society. Speaking on behalf of the women, madam Thecla, indicated that creating a cooperative for women will greatly improve the women’s production and commercialisation of their produce. She lauded ERuDeF for bringing such initiative to their area and promised on behalf of the women, to work with the Organisation so conservation can be understood by all in the Nkongho-Mbo Area. “I am very happy with what ERuDeF is doing in this our community. I believe with this idea of creating women cooperative, our women will be able to work together so as to have high yield at same time have a ready and available market for its produce through the Social Business Division of ERuDeF that is the Silver Back company Ltd,” Mm Thecla said. Speaking to the women, the Conservation Finance Officer enumerated the importance of cooperatives. He indicated that when women come together to form a cooperative, their produce will be harnessed and sold bringing in huge profits. “Belonging to a cooperative is very important in the sense that your produce will be gathered together and sold as one, bringing in more profit than would have been the case if you sold alone. Other benefits like donation of farm tools and inputs from government and NGOs will be easier to get as a cooperative,” Mr Njang said. In line with ERuDeF’s Community Conservation Social Enterprise Development (CoCoSED) Initiative, the cooperative enterprise was to engage in cassava production and commercialisation through value chain development. The women were also briefed on the procedures involved in creating a cooperative up to the legalisation stage. A Caretaker Committee was put in place to mobilise the subscription of shares as well as carry out publicity as to permit massive registration of women as members. The Caretaker Committee was sub-divided into two, that is, the Management Committee and the Publicity Committee. The cost of a share was generally accepted to be 10,000 FRS and a registration fee of 2000 FRS. The idea to form a cooperative, it should be recalled, was first introduced to the Nkongho-Mbo people during a meeting held in Buea, January 23, 2017. The idea was generally welcomed by the chiefs and elites of Nkongho-Mbo present during the meeting. The creation of cooperatives are sustainable livelihood measures taken by ERuDeF to provide alternative sources of living to communities adjacent to the proposed Mak-Betchou Area. The project is being carried out by ERuDeF with the support of Rainforest Trust.