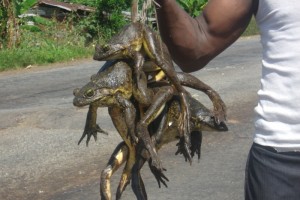 Listed as Endangered on the Red List of the International Union of the Conservation of Nature (IUCN), goliath, the world’s biggest and most endemic frog specie currently risks extinction given wanton hunting and habitat destruction in the Nlonako Mountains Littoral Region Cameroon.

Endemic to the Nlonako and Muanenguba Conservation Complex and parts of Equatorial Guinea, the Goliath Frog known by its scientific name Conraua Goliath plays an invaluable ecological role in maintaining the ecosystem and is known for its medicinal properties notably in the fight against diseases like malaria and yellow fever as they feed on the larvae of the insects that cause these diseases.

This rare amphibian specie has unfortunately been subjected to overexploitation by pet traders and loss of habitat from communities adjacent to its natural habitat. Approximately 2000 goliath frogs are exploited annually and commercialized on the Douala-Nkongsamba highway mostly to foreign nationals. An average size goliath frog, according to a pet trader in Nlonako, costs between FCFA 5000(USD 10) and 30000(USD 60) depending on the size. “It’s a delicacy in this village. We serve it to visitors and during special occasions. We also sell it to travelers on the highways” recounts a native of Kola, a community adjacent to the Nlonako Mountains. About 80% of Nlonako adjacent communities are involved in coffee plantation, oil palm and food crop plantation and hunting activities.

“I used to make about FCFA 200000 a week from the sales of frogs especially during the peak periods that run from November to February but now and I hardly can make up to 50000 a week no matter the period. “Explains Andre, a goliath frog trader in Douala

This trade is even more flourishing in the villages of Kola, Lalla and Magamba that are directly adjacent to the Nlonako Mountains. “Our most regular customers are foreigners and travelers who usually buy these frogs either for food or out of curiosity owing to its large size. There are some of them as big as the size of a new born baby” he adds

According to a preliminary study undertaken by Niba Grace, A Post Graduate Student of Biodiversity Conservation at the ERuDeF institute of Biodiversity and Non-Profit Studies (EIBiNS) Cameroon, Nlonako adjacent communities make up to FCFA 3million ( USD 6000) every year from the sales of Goliath frogs, a situation that has raised doubts about the future of this amphibian specie.

ERuDeF in partnership with Cameroon’s Ministry of Forestry and Wildlife, the ERuDeF Institute and the University of Buea with initial support worth 2000 Euros from the Helsinki Zoo USA has been engaged in baseline survey aimed at establishing the decree of threat faced by this frog specie in the hands of poachers. A long term project to culminate in the creation of a wildlife sanctuary for the over 93 amphibian species including the goliath frog currently being hosted in this sanctuary is under production pending submission and validation by the Cameroon Ministry of Forestry and Wildlife.

According to IUCN Global Amphibian Red list Assessment of 2004, amphibians are far more threatened than either birds or mammals, with 32.5% of amphibian (1,856 species) being globally threatened compared with 12% of birds (1,211 species) and 23% of mammals (1,130 species).