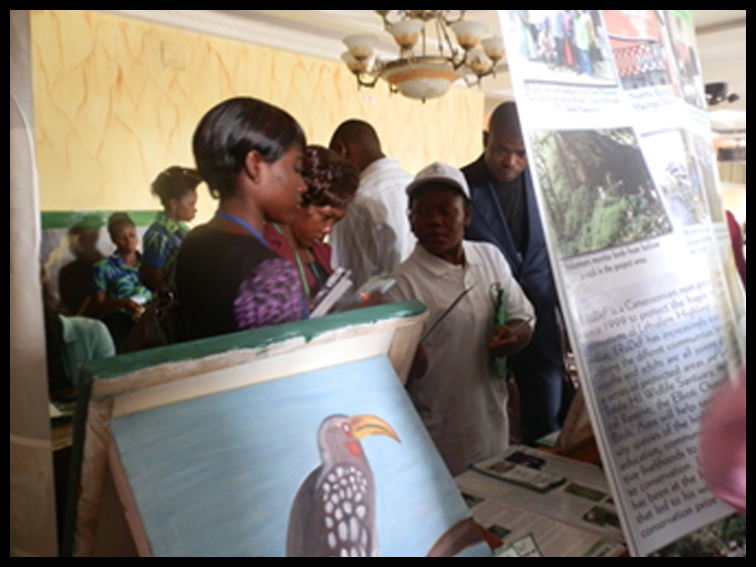 The Environment and Rural Development Foundation, recently joint their wildlife conservation counterparts to celebrate the 14th international wildlife conference under the theme: conserving Africa’s wild fauna and flora. The event was coming to Africa for the first time.

ERuDeF’s presence in the conference hall of a hotel in Buea was very conspicuous with an exhibition stand of colourful posters and charts explaining different components of ERuDeF’s conservation works. The chart on the great apes drew a lot of attention from onlookers who queued to get a grasp of how ERuDeF conducts research and bio-monitoring of wildlife with a focus on the Cross River Gorilla and Cameroon Nigeria chimpanzees on the Lebialem highlands. Another chart which equally drew a lot of attention to the ERuDeF stand was the bird chart which shows some very rare species of birds found in the country, including one of Africa’s most popular, yet endangered bird, the Bannerman’s turaco. The chart on the education component which demonstrated how the non-profit institution is helping to change community perceptions towards wildlife conservation was equally of keen interest to participants attending the two-day workshop.

Celebrated under the theme “conserving Africa’s wildlife fauna and flora: the role of international conventions”, the event had as objective to examine the extent to which international regulations conventions and agreements have enhanced the conservation of wildlife species in Africa and to what extend these agreements would actually not be working in terms of coordinating Africa’s wild flora and fauna. Opening the ceremony, the director of Environmental Governance Institute, Mr. John Manyitabot Takang, said observing the 14th international wildlife law conference in Cameroon was such an honour, given that fourteen years since its inception, it was the first time the conference was holding on the African soil.

The highpoint of day two of the conference came when ERuDeF’s Bio-monitoring coordinator, Asoh Bedwin , mounted the rostrum to talk about the “Contribution of biological monitoring in reducing wildlife crime, poaching and human pressure in great ape(Chimpanzee and Cross River)”. Ms. Asoh started by giving an overview of the Lebialem-Mone Forest Landscape which is located in South Western Cameroon, a forest area with a high species diversity and endemism. She explained that since 2010, through Line transect, Camera trapping and sensitizing the villagers of the importance of conserving these rare species, the Environment and Rural Development Foundation has considerably reduced the pressure on the forest by poachers and traffickers.
By Asoh Bedwine