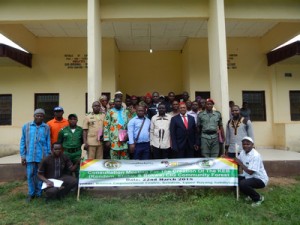 [/one_third]External elite of Ndom and Muandong communities, have endorsed the creation of Proposed Mount Manengouba Herpetological Sanctuary. They gave their blessings during a sensitisation meeting, March 10th 2018, in Ndom and Muandong respectively, in Moungo Division, Littoral Region.

According to the elite, the project to create a sanctuary in the forest adjacent to their community prioritises on the development of the people. They throw their weight on the initiative, bearing in mind that it will bring alternative sources of livelihoods on the people, and development to the community.

“We have listened to the various stakeholders talk about the project to us, and we have clearly defined what our communities stand to gain. We are so grateful that what the government and NGOs have in mind is purely constructive for our community. Giving our people alternative sources of livelihoods will mean more money in their pockets, hence, ameliorating poverty,” elucidated Massane Therese, an elite from Muandong village.

The external elite appreciated government and the facilitating organisations for selecting the Muanenguba area. They apologised for taking while to endorse the project, blaming the delay, on misconceptions, and misinformation.

“We are grateful to have that project being executed in this mountain. I have seen this kind of project being carried out elsewhere, and I can say without mincing words, that the communities adjacent to the protected area, benefitted a lot. It is unfortunate that our endorsement took some time. The delay came from misunderstanding on the concrete sense of the project. However, and as you can see, we all have one voice; which is for the government to quickly create the protected area,” indicated, Elung Akoue, an elite from Muandong village.

The perception of the community members before the additional sensitisation was that the project was being executed by World Wild Fund for Nature (WWF). Given that their previous perception and fallout with the organisation, many (especially the elite), had developed cold-feet with respect to their endorsement.

“When we first heard about this project, we thought that it was WWF. This Organisation had worked in this area before. They made a lot of promises to us which they did not fulfil. So, we lost trust in them. This made us not to listen to any organization coming into our community for similar works again,” lamented Ngoula Soume, an elite from Ndom.

After an overview of the project from the technical team from the Environment and Rural Development Foundation (ERuDeF), and the Cameroon Herpetology-Conservation Biology Foundation (CAMHERP-CBF), the chief of Ndom, Eposse Pascal, called on the elite to join forces with the indigenes back in the village, in supporting the project until its justifiable end.

On his part, Ekah Elong Yves, an elite of Ndom and a forest technician, explained to the community members more precisely the entirety of the project and what they stand to gain. He urged the community to support the project as it will come with several benefits. It was the same reaction in Muandong village. The Government Delegate of the Nkongsamba City Council, and an elite from Muandong village, elaborated on the purpose of the project.

It was on that note that all the community members pledged their collaboration towards the realization of the proposed Mount Manengouba Herpetological Sanctuary. 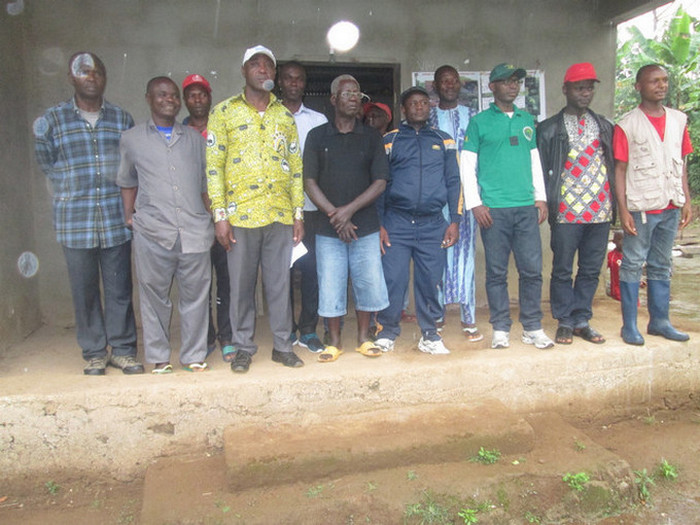 [/one_half]Mount Muanenguba which cuts across the Southwest and Littoral regions of Cameroon is said to have a heterogeneous ecosystem, harbouring 100 species of amphibians, 89 species of reptiles and 270 bird species amongst which 60% of them are endemic.

The mountain with height of 2411 meters above sea level, suffers chronic threats from communities living adjacent the mountain. Habitat degradation, which involves conversion of natural land for agricultural land through shifting cultivation, destruction of trees for commercial purposes, overgrazing and trespassing of cattle in streams and water ponds, collection of amphibian and reptile species, amongst others, are the main threats rocking the mountain.

Faced with all of these challenges, Cameroon’s leading conservation NGO, the Environment and Rural Development Foundation (ERuDeF), joined forces with the Cameroon Herpetology-Conservation Biology Foundation (CAMHERP-CBF) to conserve the rich biodiversity and Ecosystem of Mount Muanenguba with focus on Amphibians and Reptiles.

The project is being sponsored by Rainforest Trust.