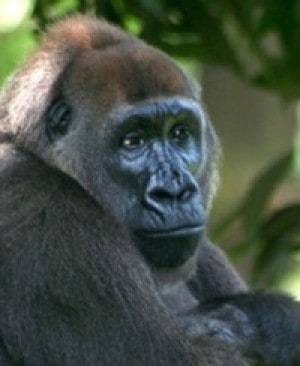 After spending two months in the Lebialem Highlands SW Cameroon, a volunteer who came for the Environment and Rural Development Foundation (ERuDeF)’s Great apes expedition has adopted a Cross River Gorilla in the Limbe Wildlife Center. Ms Hanna-Maiva Lahtine, 28, made this decision on May 11, 2013 after visiting this center that takes care of primates most of whom are orphans whose families were killed by poachers. She pledged to support the upkeep of this Gorilla with 50.000FCFA ($100) every year as long as the Gorilla lives. Speaking at the ERuDeF head office in Buea, on May 13, 2013, Ms Hannah explained that she is supporting this great ape because having spent two months in the Forest and hearing their sounds, she was moved to support the one she saw “I spent two months in the Lebialem Highlands with ERuDeF’s bio-monitors staff. During this time, I had a wonderful experience of hearing the noises made by the Gorillas. On April 24, 2013, I heard a very loud cry of a Silver-back Cross River Gorilla in Tofala forest. Even though I did not get to see the Gorilla, it was endearing for me to ascertain that these Gorillas that are highly threatened actually live in this forest. Seeing it live at the Limbe Wildlife Center therefore motivated me to lend a hand”.

Ms Hanna-Maiva Lahtine came to Cameroon under the ERuDeF International Volunteering Program (IVP). The IVP program was created in 2008 to respond to the increasing need for a constant bio-monitoring of great apes in the Lebialem Highlands SW Cameroon. Through this program, volunteers recruited from all across the globe take part in various expeditions with the most popular being the Cross River Gorilla expedition. Since its inception, ERuDeF has received about 200 volunteers for different expeditions. The program runs during the months of January, April, July and November. Some of the main forest blocks visited include Bechati, Besali, Andu, Bokwa and Fossemondi all in the Lebialem Highlands, SW Cameroon.

Ms Hanna spent two months monitoring great apes in these forest blocks and described her best moment in the forest when she spotted two African Forest Elephants in Mak-Betchou proposed Sanctuary. She fell in love with the popular Cameroonian dish “eru” and wishes she could be in Cameroon as often as possible.