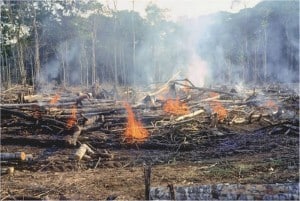 Increasing cost and demands of agricultural products induced by population growth has brought about an increasing adoption of the traditional slash & burn, and shifting cultivation system of farming in most rural communities in Cameroon. This practice of farms burning and forests clearing is very predominant in rural communities especially in Muyuka, Fako Division of South West Cameroon, especially those adjacent to biodiversity hotspots and other protected areas.

In the Lebialem Highlands and Mount Cameroon Area for example, trees are cut down for farmlands, and wood used for ‘Garri’ frying and other domestic usages.

Although a solution to overpopulation as subsistence agriculture sustains many families, the consequences of these farming techniques on the environment are almost always destructive (Atteubomrough, (1997).

The principal vulnerability is the variability in temperature and precipitation resulting to climate change, nutrient-poor soil as a result of erosion, air pollution and destruction of forests. This increases the amount of atmospheric carbon dioxide (CO2) given that most of the trees that absorbed CO2 have been cleared away by farmers for agriculture (Ngome, 2015).

Thus, traditional farming will aggravate the variability of climate leading to changing rainfall, temperature patterns and trends which will have adverse impacts on human and natural resources (Fluet et al 2009, Collier et al, 2008).

This has mostly been attributed to ignorance by the local farmers, who see climate change to be solely caused by industrialised countries undermining the role of their farming system. Therefore, there’s the need for a change in mindset and agricultural practices.

Cameroon’s leading conservation non-profit organization, the Environment and Rural Development Foundation (ERuDeF)’s and other NGOs’ efforts in local communities in Southwest Cameroon, through the introduction of Agroforestry system of farming is gradually reducing the practice of this farming system. There is however a need for a complete change of mindset and the up-scaling of agroforestry systems in all six divisions of Southwest Cameroon. This could be achieved through the production of video documentaries on the implication of the traditional systems of farming on climate change. Also, an aggressive sensitization outreach to these communities through training workshops on agroforestry system of farming. Nitrogen fixing tree species for farm optimisation will be provided to the different farming groups in all six of SW Cameroon.

To implement this project, over US$25,000 will be required for the next 2 years. US$8,000 will sponsor the preproduction, production, and post production of the documentary on the implication of shifting cultivation and slash and burn farming system on climate change in the six divisions of Southwest Cameroon. Also, some US$7,000 will be used for the production of media publications (Magazines, bill boards, roll ups and brochures) for an aggressive sensitization campaign on the implication of traditional system of farming on climate change and some alternative farming practices. Finally, some US $10,000 will assist in the provision of nitrogen fixing and agroforestry tree species to farming groups in six divisions of the region.

The project that will span for two years, will be carryout by a team of experts from the Environment and Rural Development Foundation (ERuDeF) with long years of experience in Environmental Communication and Community Conservation Education, Agronomy, and Agroforestry management.
Get more on this at www.erudef.org