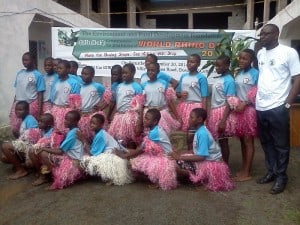 Traditional dance groups and school children in the South West Region of Cameroon renewed their interest in protecting the endangered rhino species, on September 20, 2014.

The groups met at the campus of the ERuDeF Institute of Biodiversity and Non-Profit Studies EIBiNS, Mile 18, Buea where they marked the World Rhino Day with various songs and traditional dances. The groups included the Bamumbu Cultural Dance Group,Essoh-Attah Dance Group, the Nganyang Group as well as students of GBHS Muea-Buea.

The Black Western Rhino used to inhabit the Northern part of Cameroon but succumbed to poaching and other unfriendly human activities.

Eventually, the population of rhinos dropped drastically and in 2011, they were declared extinct by IUCN in Cameroon after research failed to locate any individual.

Rhinos are hunted mostly for their horn demanded largely in the Asian market. It is believed that the horns are a possible treatment for cancer and in some countries; jewelries made from their horns are used as a sign of prestige.

WWF-South Africa in 2010 first announced World Rhino Day in 2010. The following year, World Rhino Day grew into an international success, encompassing both African and Asian rhino species, thanks to the efforts of two determined women; Lisa Jane Campbell and Rhishja. World Rhino Day has since grown to become a global phenomenon, uniting NGOs, zoos, cause-related organizations, businesses, and concerned individuals from nearly every corner of the world with one goal-saving the remaining species of rhinos.

With this in mind, the dance groups demonstrated their passion and commitment to protect the endangered apes around them. To express the predicament of the animals, they brought out Jujus and demonstrated dance moves mimicking threatened wildlife species like gorillas and elephants.

Members of the Nganyang dance group were particular about this and the population couldn’t stop cheering when they went as far as eating up a plantain stem to demonstrate the eating habits of the animals. According to the leader of that group, the move demonstrates the special connection the Bakweri people share with the great apes.

Meanwhile ERuDeF’s President/CEO Louis Nkembi regretted the disappearance of rhinos in Cameroon, but cheered up the public that it is not time to mourn, but time for reflection; to reflect on where we went wrong and what we can do to save other endangered species around us.

He said that the three main cultural groups invited to take part in the dance for rhinos are from villages adjacent to proposed protected and protected areas like the Tofala Hill Wildlife Sanctuary, the proposed Mak-Bechou Wildlife Sanctuary and the Mount Cameroon National Park, for Bamumbu, Essoh.Attah and Nganyang respectively. ‘

ERuDeF has been working for the last 15 years to save some endangered species such as the cross river gorillas, Nigeria-Cameroon Chimpanzee, elephants etc. While we sing and dance calling for the protection of rhinos in the other parts of Africa and Asia where rhinos are primarily located, today also gives us the opportunity to call for the protection of our flagship species including gorillas and chimpanzees’ Nkembi said.