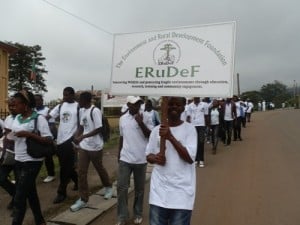 The populations of Buea and its environs have been called upon to think wisely before performing any act on the environment, to eat of the environment but remember to save for the rainy days. This was the central message that ran through as the Environment and Rural Development Foundation (ERuDeF) in partnership with US Charity Trees for the Future Cameroon and the SW Regional Delegation for the Environment commemorated the 41st edition of the World Environment Day in Buea on June 5, 2013. Officially sponsored by Trees for the Future Cameroon, the event was an occasion for reflections on some of the best ways to tackle environmental problems such as food insecurity, deforestation and climate change.

The celebrations which started on the eve saw a walk dubbed the Green walk of over 20Km through the town of Buea. The walk was performed by the staff of MINEPDED, the Cameroonian Conservation Organisation, the Environment and Rural Development Foundation (ERuDeF) and Students from the Department of Environmental Sciences from the University of Buea. It had as objective to raise the awareness in inhabitants of Buea on the importance of protecting their environment. The key messages which could be read on the placards were “Think Eat Save” “If you do not take care of your environment, the Environment will not take care of you” “Plant trees to fight the effects of global warming” 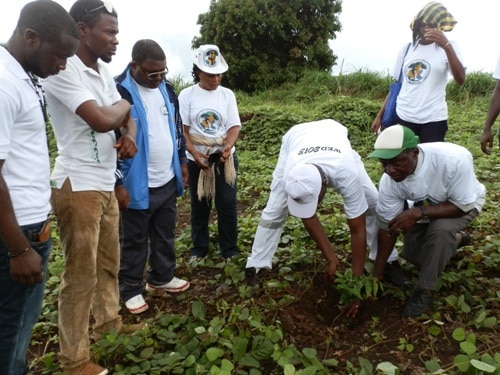 After the walk, participants planted over 20 Ornamental trees at the Campus of the University of Buea Medical School in Buea. The Regional Delegate for Environment, Francis Leopold Ebo Ebo who spearheaded this activity explained the importance “The rationale of planting these trees is to continuously tell the public that this is one of the best ways we can adapt to some of our environmental problems like global warming and water shortages. Trees help to reduce the Carbon in the atmosphere, thus fighting global warming and where we have trees we can be sure of water”. He went forth to say the water crisis in Buea could be reduced if many more residents plant trees. Mr; Ebo later on passed the tree planting on to some young students who took part in the march pass.

A conference to discuss the theme of the day “Think Eat Save” followed the tree planting activity. Speaking during this conference, the CEO of ERuDeF, Louis Nkembi stressed that in the face of the changing climate affecting food security, it is now important more than ever to protect the environment in order to be sure of what to eat tomorrow. He urged farmers to adopt more environmental friendly practices to keep the environment safe and ensure food security.Mr; Nkembi Louis also called on Cameroonians eat wisely and always remember to save for the future.

On the day proper, June 5, activities to commemorate the World Environment Day in Buea continued. A crowd pulling event brought stakeholders from government, civil society and schools to commemorate the day. Speaking during the event, the Representative of Governor of the South West Region, called on the Buea population to think wisely before performing any act on the environment. He warned that if Buea which used to be a land of plenty is now suffering from food crisis, then it is time for the people to put on their thinking caps and be more environmental friendly, if not there would be a higher risk of food insecurity and water shortages in future. The day was also marked by sketches and theatre performed by students from the University of Buea and some Primary and Secondary schools around Buea.