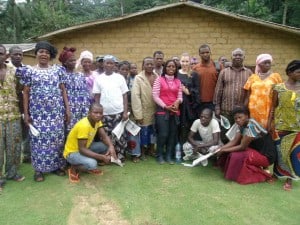 Communities bordering the proposed Tofala Hill Wildlife Sanctuary notably Nkong, Bechati and Besali have re-echoed their readiness to stand by the government of Cameroon in the creation and management of the proposed Tofala Hill Wildlife Sanctuary. This commitment was made in July 2014 in the respective communities when the West Africa Program Manager for the UK charity, Fauna Flora International (FFI) -Alison Mollon paid a courtesy visit to assess the progress of the project and the commitment of the stakeholders.

In an address by the Ruler of Nkong, His Royal Majesty Chief Eyoung Clement said that they are not against the conservation program as they have declared total support for it. In his words “the people of Nkong have long accepted the project of gazetting Tofala rainforest as a sanctuary and we are ready to support the process all the way”

The Ruler however said their major worry is that they would love the conservation organization to strengthen the sustainability of the alternative livelihood earlier donated such as purchase of vehicle to help transport palm nuts and market the oil amongst others.

In a similar vein, His Royal Majesty Chief Ekwem Tayem Robert of Besali village told FFI’s Program Manager that the village was the first to join the conservation train and has also benefited from the fall outs of conservation. He noted that the oil mill has been of utmost importance to his people and has gone a long way in improving living conditions of scores of villagers given the improved quality and quantity. He also called on Ms. Mollon to help raise funds for the marketing phase of the project.

In Bechati, even in the absence of their leader, the population turned out massively to receive Ms. Mollon. They expressed happiness about the creation of the sanctuary and called on government to demarcate the proposed protected area so that development and eco-tourism potentials can be exploited.

They were however worried that the implementation of agricultural alternatives to livelihood may conflict with the gorilla habitat if not demarcated on time.

It would be recalled that the implementation of a sustainable mechanism to cater for the local need of the forest adjacent population is the key to ensuring effectiveness and efficiency. The visit of FFI’s Program Manager was a unique opportunity for the team to redefine the alternative livelihood needs of the population and to ensure that any attempt to satisfy these needs were based on current realities on the ground as the basket of goods demanded by society are not always constant.

FFI has been financially and technically supporting the creation process of the proposed Tofala Hill Wildlife Sanctuary since 2004. Today, the process has made huge progress with the file for the creation of the sanctuary currently at the Presidency waiting final validation.