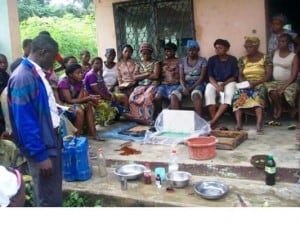 The population of Fossungu, Mmockmbie and Bechati, forest adjacent communities to the Tofala Hill Wildlife Sanctuary (THWS) in Lebialem Division, have been trained and given start-up capital to begin the production of medicated soap and detergent. The training was facilitated by a team from ERuDeFs’ Livelihood and Economic Development Program.

Associate Livelhood Coordinator, Asong Fabian, drilled the population, mostly women from the 11 villages that make up the THWS, on the techniques to manufacture soap. 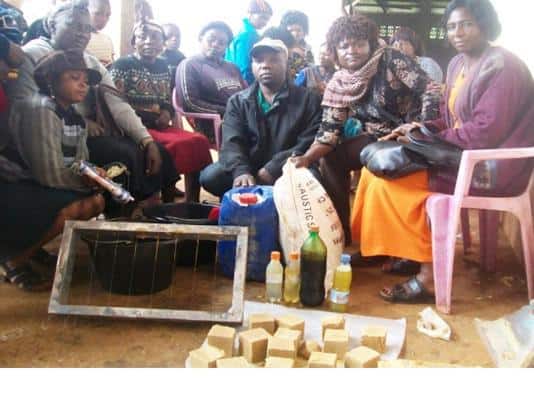 They assured the Livelihood team that they would Post training and donation of start up materialswork in closely with ERuDeF conservation initiatives.

The Livelihood Support Project for Biodiversity Management in the Southwest Region is one of ERuDeFs’ programs aimed at building the capacity of forest adjacent communities through training, provision of sustainable livelihoods and micro-credit support to both individuals and groups.

This is an attempt to reduce the pressure and over-dependence on the forest for a living and to initiate petty busineses and self-sustainability.

Meanwihle, the TWAS that received two cassava grinding mills to boost their economic status in 2014, received start-up capital worth hundreds of thousands in the form of raw materials used in the manufacture of soap and detergent.

The forest adjacent communities appealed to ERuDeF to look into the possibility of improving soil productivity, oil palm species cultivation, assistance in the form of chemicals, fertilizers, goat keeping and poultry farming.

The communities promised to enguage in sustainable soap making, while waiting for other assistance from ERuDeF and her partners.