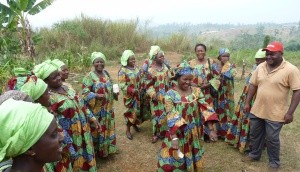 “Plant a minimum of 5000 trees in your farm and get a cash prize of 300.000FCFA”. These were the words of the Cameroon Country Director of US Charity Trees for the Future as he announced the 2013 contest for the best agroforestry farm in every division of operation in Cameroon. Mr. Nkembi Louis made this announcement to all the farming groups he, alongside officials of Trees for the Future visited during a week-long tour from the 8th -15th of February to evaluate the progress of agro forestry technologies in the South West, West and North West of Cameroon. Mr. Nkembi explained that the essence of launching this award was to motivate farmers incorporate agroforestry systems and abandon chemical fertilizers.

This prize, Mr. Nkembi explained will be given not to individuals, rather to groups where each member is able to plant a minimum of 5000 trees in their farm. He explained that the award is one per division and it would be given to only one group in any Division. The Country Director for Trees for the Future told the farmers that they need not border about getting seeds, for a team of agroforestry technicians will from February visit each farm to give them seeds of forest species such as Acacia, Caliandra and Leucania and teach them how to plant and organize their farms.

The announcement was received with a lot of joy by farmers who all pledged to plant even more trees. Mr. Ayong Thomas, a farmer in Kugwe-Batibo in the North West promised to mobilize his group members and have every member plant a minimum of 10.000 trees, so they could grab the award.

The women also received news of the award with great delight. Ms Teke Janet, a member of a focus group said the award would act as a very good motivation for them “I will rally all our members to plant more agroforestry species. Already, we are witnessing a lot of improvement in our soils due to the trees we planted. Our maize, groundnut and beans have all increased this year. This award is an additional motivation for us because we the women want to take the lead in agroforestry” The reaction in another village in the Muyuka Sub-division in the South West Region, where Trees for the Future has introduced agroforestry technologies, was the same. Farmers in Owe were excited at the announcement and promised to plant more trees. Mr. Ebai Romanus, leading a small group in Owe village said “I have seen the gains in agroforestry. I used the leaves of acacia as natural manure for my plantains. The bunches were very big and some of my neighbours said I was using black magic to have such harvest”. With the announcement of this award, Mr. Ebai plans to increase his capacity and bring many more people to practice agroforestry.