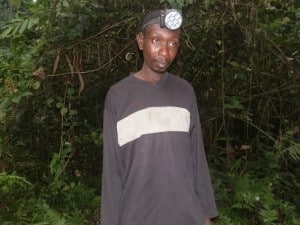 Change they say is the only constant thing in life. Who would believe that this die-heart Bechati Trapper/hunter, Jacob Adong, earning a daily income of about 12,000FCFA ($24) from wildlife sales, will ever retreat from hunting and become a wildlife conservation advocate?

The 40-year-old father of three who now works as a Field guide for the Environment and Rural Development Foundation, (ERuDeF) explains he has a long history in hunting and even though it is often said old habits die hard, he saw the need to join the conservation struggle at one point.

“I started hunting at the age of 18; going to the bush with dogs, trapping, chasing and killing animals like rat mold, squirrel, porcupines, and many others. Two years after, I realized that hunting with dogs was not really lucrative as some of the animals were either more powerful than my dogs or often went out of their reach (on trees in the forest). Thus, the next option was to learn how to hunt using guns. In my search for this, I came across a famous hunter, Pa Ngwetek Temboh (of blessed memory). He taught me how to hunt with a gun: he drew a little circle on a tree some 50 metre away, took a gun and gave me to sight and shoot into it. I did as he instructed continuously for about 5 times or so and he congratulated me saying I was ripe for the job. I took the gun home to prepare for my maiden outing” Mr. Adong narrated.

Adong Jacob explained that his first hunting venture with a gun was in December, 1993. “I set out at 7 PM when places were very dark and hid under a tree, as per the instructions of my mentor. After close to an hour, I got the sound of movement and immediately shone my touch light in that direction. The touch light got directly into the eyes of an animal and from the reaction of its eyes, I knew it was a porcupine and immediately pulled the trigger killing the animal. This first success gave me courage to hunt more and I returned home that day with three healthy animals. I then realized that hunting with the gun was more successful than with dogs. I was therefore out in the forest with hundreds of other colleagues killing animals like chuku-chuku beef (Porcupine), Flotambo (Duiker), Monkeys, Pangolin, Bush Baby (Galago senegalensis) squirrels and many others. Adong Jacob explained that he did this little knowing that some of these animals have been declared as protected species by both national and international laws until he came in contact with ERuDeF in 2004.

Mr. Adong’s encounter with ERuDeF brought about a complete transformation both of mindset and attitude towards wildlife in the now proposed Tofala Hill Wildlife Sanctuary. “In 2004, ERuDeF came into our community, organized several meetings and seminars and educated us on some protected animal species and the importance of conserving them. It was only then that I understood the legal implications of our actions and the fact that some of the animals we have been killing like Bush Baby (Galago senegalensis) , Pangolin, and monkey amongst others were protected species. I equally came to understand that Chimpanzees and Gorillas were also protected species (though I never killed any throughout my hunting career). This, coupled with the fact that I want my children to grow up and also see these animals physically, made me vow never to kill these animals again”

After some time, ERuDeF made Adong Jacob one of their field guides in the monitoring of the great apes. “I accompany ERuDeF’s Partners and Volunteers to the forest; track feeding signs, nests etc of Gorillas and Chimpanzees and report to ERuDeF” he went on. The ERuDeF field guide added that his change in hunting lifestyle is posing a threat to his former colleagues, who either hide the animals or run into hiding each time they see him approaching.

Mr. Adong has now sensitized most of his former colleagues in this area on the need to conserve these animal species to an extend that many of them are willing to desist from hunting these protected wildlife species.