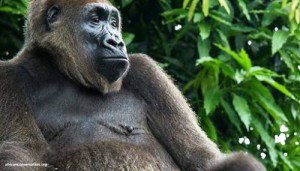 20 to30 of 300 of one of Africa’s most endangered ape, the Cross River Gorilla, found in THWS may become extinct in the next 10 years due to anthropogenic activities like indiscriminate hunting, habitat encroachment & fragmentation

Several conservations efforts implemented over the years Conservation efforts to reverse this plight has often taken a western approach which do not reflect local realities and is therefore slow in harvesting required result.

Communities have viewed this as another western initiative imposed on them.

Locals value their animals. Traditional beliefs like folklore and taboos, offer an indigenous conservation ethic and an effective means of conservation.

With the support of Flagship Species Grant from Fauna and Flora International, in collaboration with an American film team, At Films, some 8 short films, each addressing a different conservation threat and local folktale relating to CRG have been produced for and with GRH habitat communities.

The realization of this dream requires some financial implications:

You can find samples of our work and intervention at:

www.folkfilmmaking.org,https://www.youtube.com/watch?v=7H19j4EySxo, www.erudef.org, or contact us; communication@erudef.org
A similar project in 2007 was successful in the conservation of Mane Wolf in Central Brazil (Bizerril et al 2011). With about 16 years of working in Tofala, I belief this project will provide a safe haven such efforts will provide a safe haven for the 20-30 CRG in THWS. Given that a gorilla puts to birth once in every five years, it is expected that in the next 7 to 10 years the CRG population would have increased from about 30 to about 35 or 40 in this wildlife sanctuary, limiting them from straying and risking being killed like the strayed silverback killed in Pinyin, March 2013.