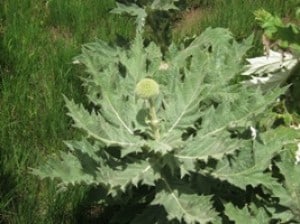 The Access Benefit Sharing (ABS) principle, it would be noted is a feature of the 2010 Nagoya protocol. According to the ABS principle, the proceeds emerging from a natural resource has to be shared equitably between the community hosting the natural resource and the individual or corporate body wishing to exploit it.

The event brought together the representative of the Southwest Regional Delegate of Environment, Protection of Nature and Sustainable Development (MINEPDED), Mr. Kuitekam Dongo Patrice, the traditional ruler of Magha, Chief Nembo Abraham, some village elites and Project Coordinator, Manuella Huque.

The Project Manager, Manuella Huque, on her part, reassured the ABS National Focal Point Deputy Coordinator and all present, that the French enterprise has no intention of copying this genetic resource promising to help fight against the bio-pirating of the Echinops plant.

She also urged the Chief and village elites to set up a Village Management Committee for the project as well as carry out feasibility study and cost analysis for the setting up of a village cooperative and submit to her.

Reacting to this, Chief Nembo Abraham lauded the steps taken in the project this far. He promised to set up the management committee before May 15, 2013. The traditional ruler was particularly grateful with the involvement of the government in the project pledging more moral and material support for the project. The Chief also signed a lending contract for the test plot necessary for the agronomic trials of the Echinops giganteus.

Meanwhile a Dry Station for the Echinops giganteus roots has been established and nursed seeds already sprouting, depicting a green light for the project.