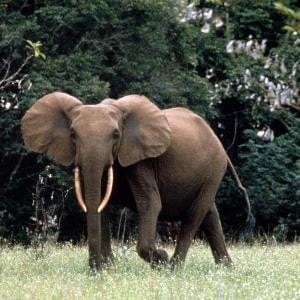 A Conservationist working for the Cameroonian Conservation Organisation, the Environment and Rural Development Foundation (ERuDeF) has sighted two Forest African Elephants in the Mak-Betchou forest block, Lebialem Highlands, SW Cameroon. The Elephants grey and black were spotted on March 23, 2013, during a bio-monitoring expedition of Great Apes by this Researcher accompanied by a volunteer from Finland, Hanna-Maija Lahtinen. Visiting Africa for the first time and seeing a wild elephant for her first time, the 28-year-old Finnish Volunteer could not hide her joy in her words “I had seen an Asian elephant before, but it was tamed. Getting to see two huge African forest wild elephants in their own habitat is an experience I would never forget”.

The team first spotted a fresh track of chimpanzee and started following it. After tracking this sign for over two hours, they discovered another sign as ERuDeF’s Research Officer for biodiversity conservation, Asoh Bedwin explains “Initially, what we saw were signs of chimpanzees but as we tracked on, we discovered new signs which were not really for Chimpanzees. We concluded that another animal was using the track because of the many shrubs and branches of trees found on the track proving feeding of the animal. Just some few minutes later, we saw the footprints and more evident of feeding signs of an elephant. As we went on, we heard sounds of broken branches and we knew it was coming from a feeding elephant. We followed the main track quietly and realized that it was not just one elephant, given that at some point, the path diverged. As we went on behold, we spotted two huge forest elephants feeding in the opposite direction. It was such an amazing feeling to come face to face with forest elephants, seeing it go about its daily life” Ms Bedwin Asoh concluded.

It is worthy to note that unlike the Asian elephants that have been habituated with success, the African elephants have not yet been habituated despite many attempts by researchers. This explains why coming face to face with a wild elephant is an experience one would want to have.

The bio-monitoring of Great apes is a program of ERuDeF which has as objective to track and monitor large mammals to be able to determine their status, population and their threats. It was in line with this that a team left for the Mak Betchou Forest. The Mak-Betchou forest block habours some exotic species like the Cameroon-Nigeria Chimpanzees, buffallos and elephants. Given that these creatures are under threat by man’s activities such as hunting and farming, ERuDeF has proposed this site to the Cameroon government as one of the sites which needs to be gazetted as a full protected area.