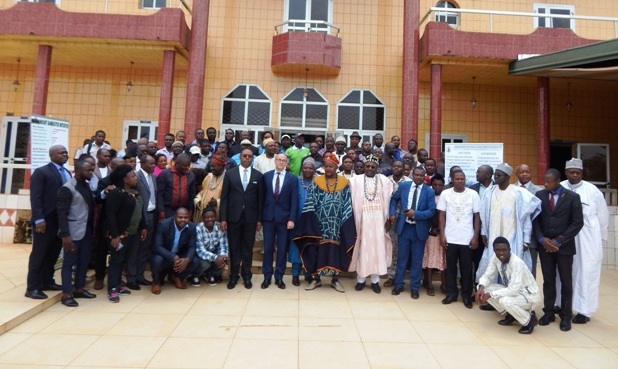 One of the world’s pioneer environmental organisation, the International Tree Foundation and Cameroon’s leading conservation non-profit organisation the Environment and Rural Development Foundation in partnership with the Cameroon Government have launched a 15 year project geared towards restoring over 35,000 hectares of the degraded landscape of the Mt. Bamboutos ecosystem dubbed the Mount Bamboutos Initiative.

The project was launched last August, 2018 in Dschang, Menoua Division, West Region of Cameroon, in an occasion that brought together the Senior Divisional Officer of Menoua, Officials of the Ministry of Forestry and Wildlife, the British High Commissioner to Cameroon, representatives of International Orgnanisations, representatives of the Cameroon Mountain University Network, Implementing Organisations, mayors, fons, village development association representatives, youths and women representatives of communities in and around Mount Bamboutos.

Aimed at restoring the biodiversity and ecosystem functions of the Mt Bamboutos ecosystem, while securing the livelihoods of the local and indigenous communities, the Mount Bamboutos Initiative aligns with Cameroon Government’s 2017 pledge to the Bonn Challenge.

“The Mount Bamboutos Initiative aligns with specific objective number four of Cameroon’s forestry policy and will contribute to Cameroon Government’s objective to restore over 12 million hectares of forested and degraded land by 2030 as part of the Bonn Challenge,” Mr. Confiance Ebune Balungeli, SDO, Menoua Division noted.

Also geared towards ensuring food security and economic resilience for over 30,000 households in the Mt. Bamboutos area, the restoration of the biodiversity and ecosystem functions of the mount Bamboutos ecosystem has become crucial, that it has attracted local national and international attention.

Conservation is top on the British agenda. We recently held a meeting in London which His Excellency Philemon Yang attended, sustainability and conservation at the heart of the agenda for the next two years with the British Government. I am particularly excited about the Mount Bamboutos Initiative because it brings together a wide range of stakeholders, which gives me a great joy. It’s a great example of how people can think globally and act locally,” Rowan Laxton, the Brirish High Commissioner to Cameroon said. 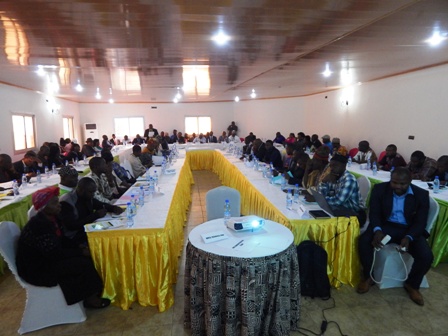 After following presentations on the short and long term global objectives, activities and expected outcomes during the launch, community representatives and other stakeholders implicated in the Mount Bamboutos Initiative greeted the project with great expectations. To the Women Representative from Bamumbu, Celine Lekunze, the project will serve as a panacea to natural disaster in her area.

“I think the project has come to help us in many ways. We have been suffering from landslide in that area for many years. If the Government is able to take care then it going to solve the problem that scares us every year for example each time it rains we ask ourselves questions like which direction will the landslide occur this time? How many people will die this time? Etc. I belief that if we the women are trained and engaged in tree planting, it will hold the soil firm and save us from natural disasters,” Mrs Lekunze expounded.

On his part, the Secretary General of Mmouk Development and Cultural Association, Erick Chialefack, opined that the project has the propensity to improve on community livelihood. “The Mount Bamboutos Initiative is a wonderful project which I think if all stakeholders take it seriously, will improve on the livelihood of people in the Mount Bamboutos area,” he added.

The Acting President of the Mount Bamboutos Fon’s Association, His Royal Majesty, Serge Momo, made a clarion call on all traditional rulers to join him rally support for the project.

“I invite my colleagues (all traditional rulers) of the Mount Bamboutos Area to come so that we can put our hands together for the success of this project. We cannot live without trees, because they protect our environment and soil from erosion,” he said.

Mean while the Youth Representative of Menka Village, Eric Khan, like other youths, promised to rally and train other youths within his community for the effective realization of the project. “I have learnt a lot about this project that will take back home to my people in Menka. I will educate my people on how to carry out afforestation and agroforestry techniques,” he pledged.

Disturbed by the government’s indifference towards supporting mountain restoration agenda in Cameroon over the years, the President and Chief Executive Officer of the Environment and Rural Development Foundation situated the importance of restoring biodiversity and ecosystem functions of the Mt Bamboutos ecosystem to the Cameroon Economy.

Mount Bamboutos, it should be noted, is the third highest peak in West Africa. It cuts across the Northwest, Southwest and West Regions of Cameroon. Hitherto considered one of the richest mountain biodiversity hotspots in Africa and the second highest water tower in Cameroon,  Mount Bambutos has almost been completely degraded with many species gone to local extinction, natural vegetation almost completely disappeared, and springs dried due to massive deforestation, intensive and uncontrolled farming in low and high altitude areas. With the launching of the Mount Bamboutos Initiative by the International Tree Foundation and the Environment and Rural Development Foundation, it is hoped that the biodiversity and ecosystem functions of the mountain will be restored and the livelihoods of the local and indigenous communities secured.