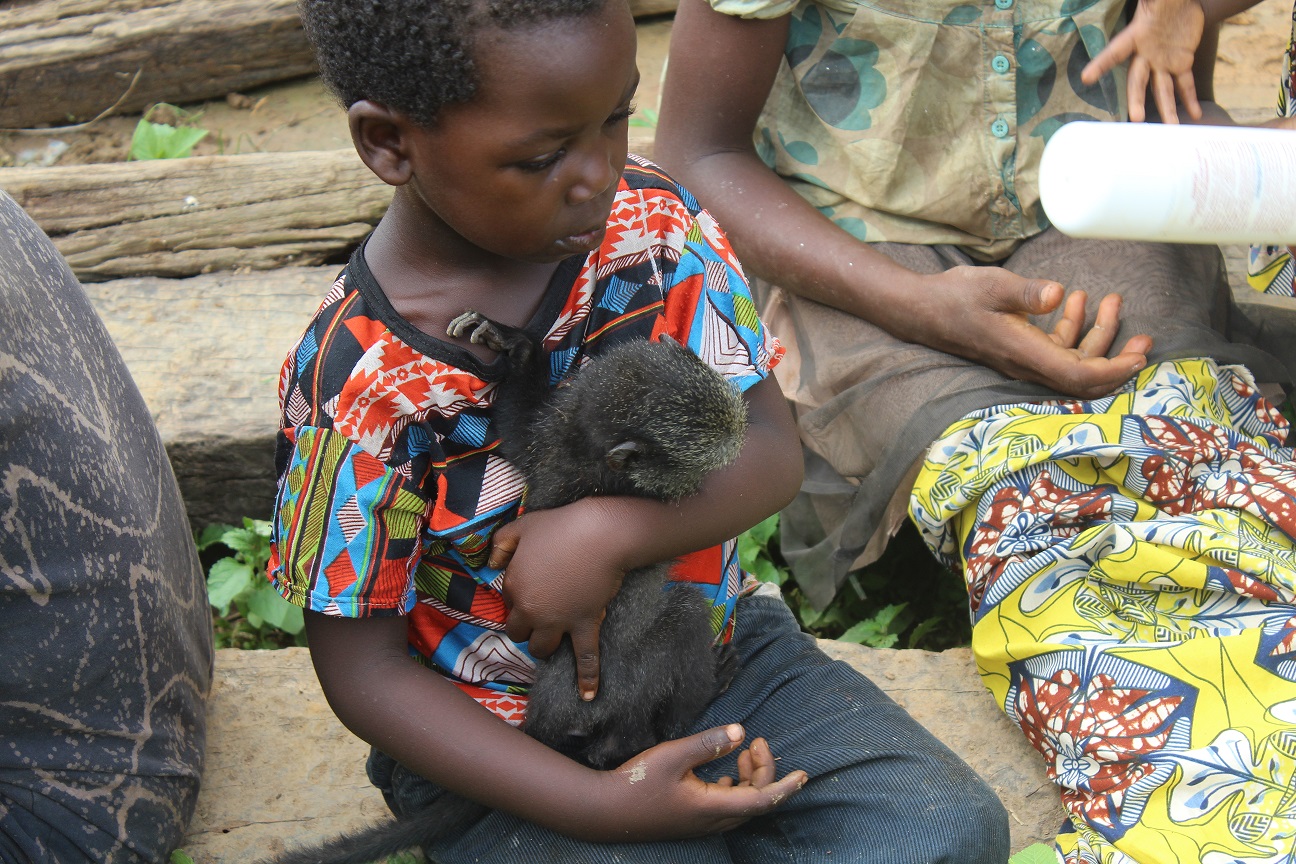 Primates
in the Deng Deng National Park such as the endangered Gorillas and Chimpanzees
are likely to suffer the effect of Zoonosis (transfer of diseases from humans
to animals and vice versa). This is so due to the high encroachment into
wildlife habitat. The life cycle and mode of transmission of intestinal parasites increase
the chances of cross host infection between phylogenetically related or
non-related species and re-infection of species.

The serious threat that parasites can  impose  on  endangered  wildlife  species  is  increasingly  recognized,  as it  is    important  in  preserving biodiversity in wildlife ecosystems and controlling the emergence or re-emergence of diseases. Sensitization and mindset change is of great importance in the communities around the Deng Deng National Park to secure the future of primates and prevent the outbreak of diseases.

Angwa Gwendoline has been working closely with communities around the Deng Deng National Park for some years now. With the emergence of COVID-19 and other zoonotic diseases, she is very worried at the rate at which locals of this area are getting close to primates most especially, and other wildlife species. Hear her “the rate at which people in this area are increasing getting in contact with primates and other wildlife species is alarming. This increasing contact will probably expose them to zoonotic diseases”

Many species of wildlife today,
inhabits relatively small areas because the vast forest that existed in the
past has been destroyed by human activities and as a consequence, diseases
appear to be more common in wild populations (Kock, 1995; Lilly et al., 2002
and Gillespie et al., 2008). To support this fact, a survey of emerging
pathogens in wildlife was conducted in North America by Dobson and Foufopoulos
in 2001and they found out that human involvement facilitated 55% of pathogen
outbreaks.

233 critically endangered species listed by the IUCN, were alleged threatened by infectious diseases (Smith et al., 2006). These diseases are regarded as the cause of fluctuation or decline in biological population (Macphee and Greenwood, 2012). Wildlife diseases have historically gained attention primarily when they were considered a threat to agricultural systems and the economic, social, or physical health of humans (McCallum and Dobson, 1995; Holmes, 1996; Daszak et al, 2000).  These parasites may be very important to determine the host-health and show  significant  influence on survival and reproduction of populations (Scott 1988; Lewis et al. 2002; Roberts & Janovy 2008).

Coupled to the above, primates as well as other species of
wildlife in the Deng Deng national Park are facing numerous problems amongst
which are, habitat fragmentation, habitat loss, illegal hunting, and a hosting
of others. The Environment and Rural Development Foundation through its
flagship program, Eastern Biodiversity Initiative is working to create a
corridor from Deng Deng National Park to the Belabo Council Forest with support
from World Land Trust. This corridor will provide and enhance suitable conditions
for the movement of endangered species and prevent occurrences of inbreeding
resulting from habitat fragmentation. ERuDeF is also supporting both the local
communities of the corridor area and the Divisional Delegation of Forestry and
Wildlife for Lom, to create two Community Forest Reserves of respectively 5,000
ha and 4,588 ha, to preserve a vital corridor between Deng Deng National Park
(DDNP) and Belabo Council Forest in Eastern Cameroon 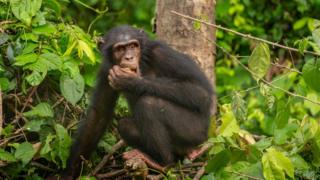 “We have to stop the trafficking, we have to stop using Chimpanzees for entertainment, We have to protect their forest” says Dr. Jane Godell who spent 60 years studying Chimpanzees in what is knowm today as the Gombe Stream National Park, Tanzania. Celebrated every 14 of July, the World Chimpanzee Day seeks to raise awareness about the vital need for worldwide participation in their care, protection, and conservation in the wild and in captivity.

Chimpanzees are considered as closest to humankind biologically. Jane Godell says we share more than 98% of of our DNA with them. Despite this close relationship humankind share with Chimpanzees, trafficking of chimps by human beings is on the rise, the bush meat market as Jane Godell puts it, is saturated with chimps, they are losing their habitat as a result of human encroachment.

The 2020
edition of the world Chimpanzee Day is celebrated in the context of the
COVID-19 pandemic that has seemingly come to to stay. Humankind’s endless quest
for survival has pushed him to consciously or unconsciously encroach to the
habitats of most wild animals, drawing them nearer and nearer to us. This has
made us so venerable to zoonotic diseases, COVID-19 being one of the many.

ERuDeF’s efforts in
conserving and protecting the most endangered subspecies of Chimapnzee, the
Nigeria-Cameroon Chimpanzee

The Environment and Rural
Development Foundation on June 11 2020 launched one of her landmark projects, the
Deng Deng-Belabo Conservation Corridor
Project in Eastern Cameroon. This part of Cameroon is a hub of industrial
lodging and commercial wildlife hunting, thus the critical need for
conservation action.  ERuDeF will be supporting
both the local communities of the corridor area and the Divisional Delegation
of Forestry and Wildlife for Lom, to create two Community Forest Reserves of
respectively 5,000 ha and 4,588 ha, to preserve a vital corridor between Deng
Deng National Park (DDNP) and Belabo Council Forest.  This project will assist in the protection and
conservation of the endangered Western Lowlands Gorillas likewise the
endangered Central Chimpanzees. Other species that will benefit from this
project include but not limited endangered white bellied pangolins, vulnerable
leopards, the near-threatened forest Buffalos etc.

The Task force and Technical Committee charged with the elaboration of the management plan of the Tofala Hill Wildlife Sanctuary, have recommended the need for potential corridors around the Sanctuary to be identified. This recommendation was made during  the Second Taskforce and the Third Technical Committee meetings that took place in Mbalmayo from August 11to … Read more

An increasing number of Cameroon Nigeria Chimpanzees are being captured on Camera traps in the Tofala Hill Wildlife Sanctuary. In the last survey of camera traps planted in this Sanctuary, a very large group of chimpanzee (20 individuals) was caught in a camera trap. This survey, according to the Environment and Rural Development Foundation (ERuDeF)’s … Read more

Some two adjacent villages to the Tofala Hill Wildlife Sanctuary, Fossimondi and M’mockmbie, hitherto hesitant to collaborate with the Sanctuary Service and the Environment and Rural Development Foundation (ERuDeF), recently pledged to work together with these establishments for the effective management of the Wildlife Sanctuary. This follows a series of sensitization meetings from March to … Read more