20 Chimpanzees captured on One Camera Trap in Tofala. 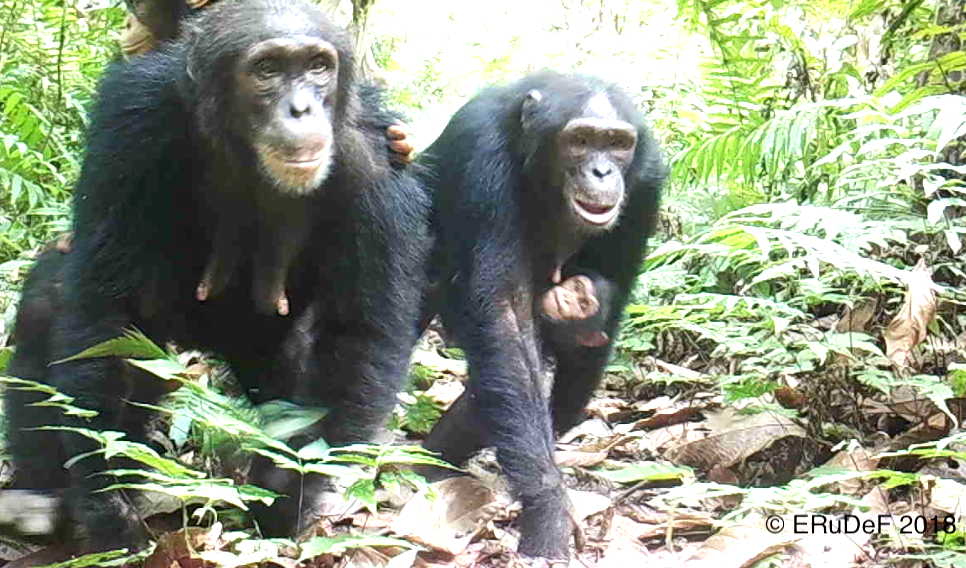 An increasing number of Cameroon Nigeria Chimpanzees are being captured on Camera traps in the Tofala Hill Wildlife Sanctuary. In the last survey of camera traps planted in this Sanctuary, a very large group of chimpanzee (20 individuals) was caught in a camera trap.

This survey, according to the Environment and Rural Development Foundation (ERuDeF)’s Biologist, Gwendolyn Angwa, is an indication that the population of chimpanzee in the area is increasing. “Unlike before when we could barely have a group of 6 to 8 individuals running pass the camera trap, the situation has changed; chimpanzees are now very confident and no longer afraid of the camera traps. Having a group like this with four babies show that the population of the most endangered sub species of Chimpanzee (Pan troglytoide elloitii) is increasing and there is transmission of favorable gene variation from generation to generation,” she expounded. The ERuDeF Biologist attributed this success to continues forest surveillance and patrol by rangers, and community sensitization on the importance of conserving this species and their habitat thanks to support from Rainforest Trust-USA.

The Tofala, as it is simply called, is one of Cameroon’s newest protected area created in 2014 in the Lebialem Division by a Prime Ministerial Decree for the conservation of some close to 40 Cross River Gorilla, over 150 Nigerian Cameroon Chimpanzees, unknown population Drills and other biodiversity species.

Since the creation of this protected area, the facilitating NGO, ERuDeF has been working towards ensuring the long term conservation of endangered biodiversity species in the area, most especially the Cross River Gorilla, Nigeria Cameroon Chimpanzees and Drills amongst others to be watered down by unsustainable anthropogenic activities. Last January, 2017, the organisation joined forces with Rainforest Trust USA and initiated the process for the elaboration of a Management Plan for Tofala. The draft management plan has been validated by the adjacent villages and subdivisions, with plans underway to divisional, regional and national validations.  With this increased in Chimpanzee population, there is utmost need to beef up alternative livelihood supports and conservation education in adjacent communities, and forest surveillance.