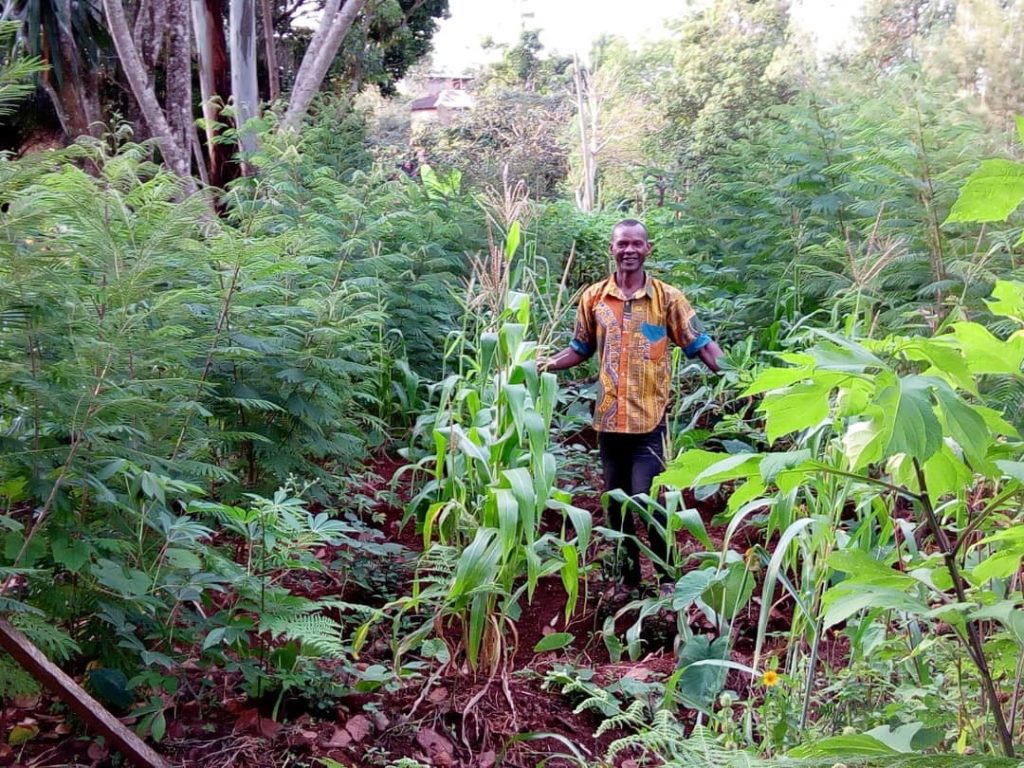 “I will never use any chemicals fertilizer on my farm again.” Says Kedni Joseph, a Forest gardens farmer in Bana village, West Region of Cameroon. With the introduction of the Forest Gardens Program by ERuDeF, farmers in Cameroon’s Western High Plateau and Nlonako-Muanenguba Mountains have boasted their agricultural production substantially. Their farms are much more diversified and and they now produce all year round. Also, farmers involved in this program have completely abandoned the use inorganic which is not only costly to buy but also degrade the soil, in favour of organic fertilizers.

Kedni Joseph is an experienced forest gardens farmer based in Bana village, West Region of Cameroon. He testifies that his secret all along to optimum production and fertile soils is acacia. Acacia is a small tree or shrub belonging to the genus Acacia, of the mimosa family. They are nitrogen-fixing trees that are very good for improving or boosting soil fertility.

Kedni Joseph has over 5 hectares of land in which he cultivates diverse food crops, economic fruit trees such as plums, avocados and medicinal trees like neem, prunus, sesbania and many more. In addition, he has a reservoir which irrigates his field during periods of no rains. At some sections of his forest gardens, he has a piggery, sheep, and another section with vegetables and pepper cultivated in about 0.25ha.  He was introduced to Agroforestryby ERuDeF, several years ago which is today known as the Forest Gardens Program.  Joseph says before the soils were not fertile. When he introduced the alley cropping system where he planted mostly acacia in alleys, he noticed improvements. As years passed by the soils became more fertile thus his crops were doing so well. Today he has over hundreds of thousands of acacia trees in his forest garden. “I cultivate pepper, vegetables only with the use of acacia leaves as my own organic manure. I want to thank ERuDeF and Trees for the Future for ‘opening my eyes’…” ,Joseph said. He says acacia leaves are fodder to his sheep and pigs.

Just like Kedni Joseph, Nitcheu Jean in Bakassa, Western Cameroon is also one of the successful farmers as far the Cameroon Forest Gardens Program is concern. Before the introduction of this program, Nticheu Jean was spending a lot of money in buying chemical fertilizers. His fields were fast losing their fertility as a result. “I don’t use chemical fertilizers again. I use inorganic fertilizers which is less costly and soil friendly. I have planted nitrogen fixing trees like acacia around my farm which helps in improving soil fertility. Before I used to spend not less than XAF 100,000 in buying fertilizers to apply in my farm. Now I spend nothing, my fertilizer is right here in my farm” Nitcheu Jean said.

The Cameroon Forest Gardens Program is the project of the ERuDeF’s Department of Agriculture. This program aims to improve on the food security, nutrition and incomes of resource-poor farmers through the development of climate-smart agriculture and improvement in multiple income streams in diversified and optimized family farms extending from 0.1 ha to several hectares.

The program also integrates the restoration of degraded agricultural lands through multiple soil health improvement modules. The forest gardens approach delivers first and foremost, improved soil quality, while at the same time increasing food production and nutrition, enhancing food security, increasing labour opportunities, generating important additional products such as fuel wood and fodder, timber, fruits and medicine, and eventually higher farmers’ incomes. In the next five years, the program seeks to create about 10,000 forest gardens in Cameroon. It currently operates in the Western Cameroon region including the Northwest, West, Littoral and Southwest Cameroon. In the last two years the program activities have been focused on the Mount Bamboutos, Western High Plateau and the Nlonako- Muanenguba Mountains Landscapes.

This project is funded by Trees for the Future, USE