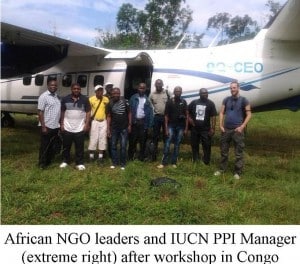 Meeting in Nkala, Democratic Republic of Congo from 18th to 23rd of April 2016, these NGOs came up with new strategies against forest degradation, habitat fragmentation, poaching and illegal wildlife trade that have placed Africa’s great ape species at the risk of extinction within the past century

Some of these strategies included the need to strengthen members of the network, promote good governance and best managerial practices and most importantly mobilise funds for research, development and valorisation of work and research results of the networks’ members.

The workshop culminated in the adoption of a six month roadmap for the network with emphasis on key thematic areas like biodiversity conservation, climate change, landscape restoration and sustainable development.

According to the IUCN PPI Manager for Central Africa Sub Region, Mr. Thomas Bacha, the workshop was organised against the backdrop of growing conservation challenges in Africa.

“The general situation of biodiversity conservation in Central Africa region has degraded over the years despite successes made in some specific areas…….the political and socio-economic situations in the countries in the Central African region has further compounded the situation making concerted effort against wildlife poaching an urgent necessity”Mr. Bacha said.

Participants said the workshop came at the opportuned moment

“The workshop helped me in understanding conservation challenges faced by other NGOs in the Central African Sub Region and how they are managing their challenges”said ERuDeF’s Director of Wildlife, Mr. Tabi Allen