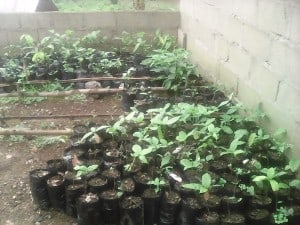 [/one_third]Farmers around the Mount Cameroon National Park who undertook training on agroforestry techniques at the Mt. Cameroon area have begun raising nurseries of agroforestry tree species that will be transplanted into their farms to boost yields.

This observation was made recently by the Environment and Rural Development Foundation (ERuDeF)’s Cameroon Mountains Endangered Trees Programme Manager, Adeline Tengem during an evaluation visit to some four communities in the four clusters of the Mt. Cameroon National Park.

Aimed at monitoring progress made by farmers few months after a training workshop on agroforestry farming technologies organized by ERuDeF, it was realized during this trip that farmers in Bakingili, Bafia, Bomana and Bova in the West Coast, Muyuka, Bomboko and the Buea clusters of the Mt. Cameroon National Park have begun raising nurseries of multipurpose species.

Some of these species include Malus domestica (Apple), Elaeis guinensi s(palms), Garcinia cola (Bitter kola), Persea Americana (African pear) and Irvingia gabonensis (bush mango). The farmers attributed this initiative to the training given them by the Organization last March, 2016.

“After understanding farm optimization techniques in agroforestry, I realized the importance of prioritizing the agroforestry approach in my farm rather than just planting normal trees. With the training on farm optimization, I understood that I could get rid of the useless trees in my farmland and plant economically viable ones.” the nursery Assistant of Bafia Community, Fai Godlove, testified.

Mr. Fai added that apart from just raising agroforestry trees in his nursery to boost soil fertility and increase farm yields upon planting in his farm, he is also interested in timber species like Entandropragma angolensis (mahogany), Microberlinia bisulcata (Zebrawood) Afrostyrax lepidophyllus (contri onion) and Prunus Africana (pygeum) to integrate alongside agroforestry species for the livelihood of his future generation.

A Bomana based farmer, Mr. Mbah Peter, on his part said he is impressed with the farming methods and the possible impact on agricultural productivity.

“With this technique, I belief I can use a small portion of land and produce more than what I am producing now. I am confident that when these trees will be transplanted, they will increase my farm yields and income level” Mr. Mbah said.

The Cameroon Mountain Threatened Trees Programme Manager was very impressed with the strides these farmers have made within such a short period of time.

Such move according to her, will speedy the realisation of the project’s long term goal.

“Introducing the agroforestry in these communities was a way of empowering adjacent communities to the Mount Cameroon National Park as a means of reducing anthropogenic pressure on this biodiversity hot spot. This system would diversify and improve on the income of the household of these adjacent communities who are mostly farmers and depend solely on the Park’s resources for their alternative livelihood” she expounded.

The Conservation of Threatened trees of Mt. Cameroon is ERuDeF’s initiative conceived in 2011. It is supported by Fauna and Flora International, UK and the Mohamed bin Zayed Species Conservation Fund, of the United Arab Emirates.