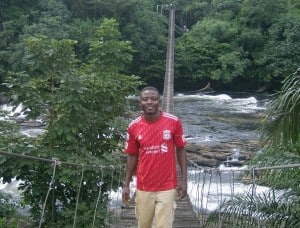 The Officer in charge of Protected Area Development at the Environment and Rural Development Foundation (ERuDeF), has won the coveted prize for the best staff of the year.

Mr. Enokenwa Allen Tabi was elected, January 6, 2014 during the ERuDeF’s 2014 planning meeting, which took place at the ERuDeF Head Office, Buea under the auspices of ERuDeF’s President/CEO, Louis Nkembi. The meeting was attended by staff from the branch office in Menji and the Head Office in Buea with Tabi winning an overwhelming majority of 18 out of 24 votes for 2013 best staff.

Allen Tabi received a cash prize of 100.000 frs cfa as motivation for a job well done while Forbe Hodu who grabbed the second position received 75.000 and Asa’a Lemawah went home with 50.000 frs cfa.

The selection process for best staff started in December 2013 with the nomination of some 10 outstanding staff and a driver. Three of the staff with the highest nominations including Enokenwa Allen Tabi, Forbe Hodu and Ms Asa’a Lemawah were selected and voted during the General Assembly.

Speaking about his victory, the laureate said the award came as a surprise “Even though I contributed enormously towards the enhancement of the organization’s overall mission and accomplished all my planned tasks for the year, I had no idea that I will be the best staff of the year. To be sincere, I nominated other staff for this award. It is sometimes difficult to evaluate yourself. However, I was nominated by some staff and I won the best staff of the year. In any case, I feel happy to receive the award. It is a motivating factor in my career” Allen said.

Mr Tabi equally said that he could not take all the glory for the award. “If you ask me, I would say that all the staff of ERuDeF merited this award, because all of us always work together to achieve the common goal for the organization”

He attributed his success to hard work, duty consciousness and humility; encouraging other staff to be devoted and be hard working for “hard work is the key to success”

Enokenwa Allen Tabi holds a B.Sc in Animal Biology and a Masters Degree in Ecology and Wildlife Management from the University of Dschang. He was recruited into ERuDeF in 2011 as a Biologist and today serves as the Officer in Charge of Protected Area Development in the organization.