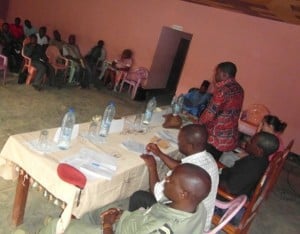 The people of Bamumbu have re-echoed their utmost commitment to the Echinops giganteus/ABS Project and total collaboration with the project team as Man & Nature, and other financial partners indicate interest to continue with the project.

They aired their pledge on Thursday January 23, 2013 at the Wabane Council Hall during a ceremony to launch the implementation phase for the promotion of the plant Echinops giganteus.

Welcoming all and sundry to this launching ceremony, the traditional ruler of Bamumbu HRM Fon Lekunze Nembo-ngweIII; thanked ERuDeF for her role in conserving endangered species of wildlife in the area and restoring the fragile landscape of Mt Bamboutus. He expressed gratitude to Man &Nature and the French enterprise for taking the project into the next phase. The first class fon thanked the signatories of the Nagoya protocol for instituting the ABS principle of which they are the first to benefit from it in Cameroon.

Fon Lekunze, expressed lots of hopes in the project: “After the PIC meeting we had in 22th November 22, 2013, I realized that the project has a very big future. I belief my people will gain directly because they are the ones to plant, and market the crop through their cooperatives”. With this hope, the traditional ruler passionately prayed for the success of the project. “With all honesty and straight forwardness, myself and the population of Bamumbu are ready to join our partners in ensuring the success of the project” he said.

Affirming this, the second Deputy Mayor of the Wabane council, Mr. Richard Nankeng, representing the mayor, said they are quite fortunate to have the project in Wabane. In what he termed “the development phase”, Mr Nankeng said the implementation phase will greatly restore the lost vegetation of the area, bring employment to the sons and daughters of Wabane, who will get themselves more involved in the farming and commercialization of this plant and will make the community economically viable.

In the same light, the third class chief of the Magha-Bamumbu community, Mr. Abraham Nembo, expressed delight working with ERuDeF and partners during the pilot phase of the project pledging the full support and collaboration of his community as the project gets to the implementation phase: “We will do our best to sustain the project-we will nurse seeds, encourage villagers, involve and educate them about the project” he promised.

Another resounding issue regarding the implementation phase of the project during the launching ceremony was the need for community education and sustainability. The Wabane Sub-divisional Delegate for Women’s Empowerment and the family, Chief Aloys Forcha Alonkong, just like the president of the Lebialem Women Forum, Madam Celine Lekunze opined that the second phase of the project focuses more on educating the population on the production of the Echinops; its conservation and sustainable cultivation. He also stressed on the involvement of women in the project.

The Private Secretary to the Sub-divisional Officer of Wabane, Robert Lekunze, representing his boss at the launching ceremony, expressed gratitude to ERuDeF and partners for continuing with the project. He urged the people of Bamumbu to embrace “this transformative project” given that it takes in to consideration national environmental priorities and is also in line with objective 1 of the millennium development goal; eradicating hunger alleviating poverty.

In her presentation, the assistant project coordinator of the Echinops/ABS project, Mrs. Alida Kenmene, lauded the collaborative efforts of the Magha-Bamumbu people toward the realization of the first phase of the project. In spite lots of administrative bottlenecks that characterized the first phase, Mrs Alida Kenmene revealed that enormous successes have been recorded during the first phase of the project. She said principal amongst these successes are an inventory of natural resources available, an ethno botanical survey in the area, a detailed map of the area and the distribution of targeted natural resource, and the development of a management plan for the production and supply of echinops.

Meanwhile the implementation phase of the project according to the Assistant Project Coordinator, involves, but not limited to, the development of income generating activities which are sustainable, can be equitably shared and favor the environment of Mount Bamboutos fragile landscape. For instance about 150 beehives will be installed, 15 000 trees planted and water catchments in and around Magha protected.

Project Manager of Echinops Giganteus, Manuella Huque on her part, expressed satisfaction with the project progress this far assuring the people of Magha Bamumba that the project will be all means respect the people and environment.

The project Director, Louis Nkembi, who is also the CEO/President of project host organization, ERuDeF, divulged that the echinops project will greatly contribute in the realization of ERuDeF’s goal of conservation wildlife and protecting fragile environment as it will contribute toward sustainable management of the Mount Bamboutos degraded and fragile landscape.

Over 30 indigenes of Bamumbu and Magha-Bamumbu villages actively took part in this launching ceremony amongst other dignitaries.