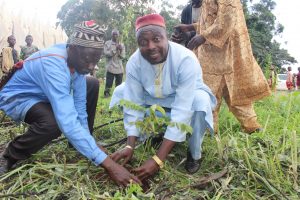 One of the villages in Batcham Sub Division, Bamboutos Division in the West Region of Cameroon, Bangang, has celebrated the maiden edition of its Trees Day, being the first village within Cameroon to engage in such environmentally friendly initiative.

Officially launching the Trees Day, the Fon of Bangang, His Royal Majesty Momo Keubou Serge Evariste put the Tree Day in perspective. “The celebration of this Day is in line with a pronouncement I made during by coronation in June, 2016 to valorize ecotourism in Bangang and to preserve the Mount Bamboutos Ecosystem for better water quality for the population. It is also to honour the Royal Decision N0 006/CSB/SG/2017 I signed last year for the conservation and restoration of the Mount Bamboutos area,” the Traditional Ruler clarified.

Celebrated under the theme; Plant Trees to Fight Against Water Scarcity, Desertification and Climate Change, Fon Mono Keubou underscored the importance of tree planting in restoring the Mount Bamboutos Ecosystem that has been degraded by unsustainable human activities.

“ I want to teach my people the importance of tree planting; trees are our life; with trees, we can protect the environment, fight against soil erosion and ensure quality water. I choose the month of April to observe tree day. All men, women, and children are therefore called upon to plant trees; tree planting is not only limited to this day but should be a lifestyle” he stated.

On his part, the Director of ACREST commended the Fon of Bangang for the importance he has attached to the environment and for including environmental protection in his development vision of his village. “There is a saying that local action, global impact, global action. Though small action, the impact of this activity will be far reaching,” he added.

Corroborating his NGO counterpart, the President/CEO of ERuDeF, Louis Nkembi said the Initiative of His Royal Majesty Momo Keubou is in line with the overall goal of the Mount Bamboutos Initiative, which is to conserve the biodiversity and restore the highly degraded landscape of Mt Bamboutos ecosystem, while improving on the quality of lives of the local and indigenous communities. He stated that same practice will be replicated in other villages around the Mountain.

The Trees Day celebrations in Bangang culminated in the distribution of over 800 2018 Trees Day exercise books with detail articles of the May 2017 Royal Decision on the conservation and restoration of Mount Bamboutos. Trees were also planted at the Bangang Fon’s palace and over 1000 water friendly trees distributed to community members and schools for planting in the Mount Bamboutos area.

The 2018 Trees Day in Bangang was facilitated by ACREST in collaboration with ERuDeF and GADD, with support from IUCN.