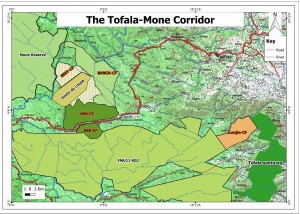 The government of Cameroon has approved the creation of a new community forest in Manyu Division. The two-year Provisional Management Agreement of the community forest to be named BANCK (Bakumba, Ayukaba, Numba, Chinda, Kendem) community forest, was approved by the Minister of Forestry and Wildlife, Philip Ngolle Ngwesse, through a Ministerial Decision N o 003 of January, 3 2018.

According to the ministerial prescription, the community forest is situated in the South West Region, Manyu Division, Upper Bayang Sub-Division with villages involved being Bakumba, Ayukaba, Numba, Chinda and Kendem. It is bordered to the South of Bakumba and Ayukaba villages, to the East of the proposed BEET (Bokwa, Etoko, Egbemo and Tafu) community forest, to the North of Kendem village and to the West of Chinda and Numba villages. The BANCK community forest covers a surface area of 4874 hectares with well-defined boundaries. 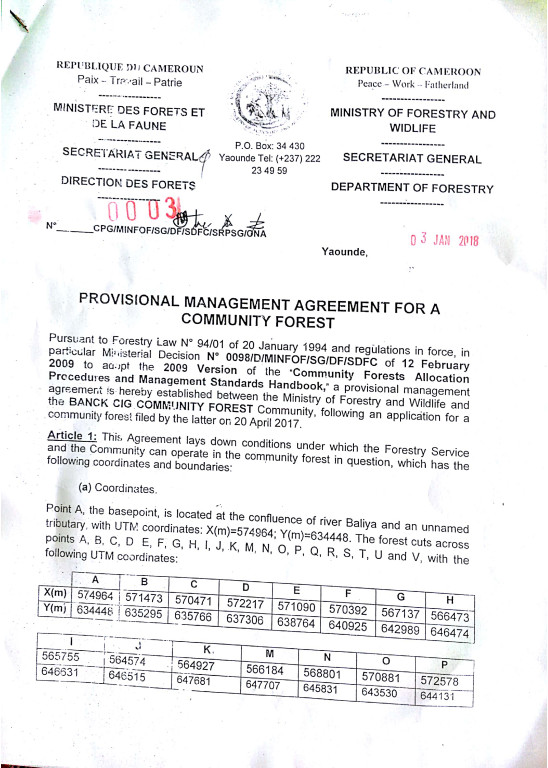 This move, according to the President/CEO of ERuDeF, Louis Nkembi, is a great stride in the organisation’s drive towards ensuring the long term conservation of the biodiversity of this unique tropical rainforest through a community and municipal collaborative management approach.

He disclosed that the creation of the BANCK community forest is just the first step in his strive to genetically connect some close to 200 Cross River Gorillas sub population and a few thousands of Nigeria Cameroon Chimpanzees, a hundred African Elephants, unkown population of Drills and Buffaloes amongst others within the landscape between the Tofala Hill Wildlife Sanctuary and Takamanda National Park in the South West Region, to the wider Kagwene Gorilla Sanctuary in the North West Region through community forestry.

The realisation of such a long term project according to the ERuDeF President/CEO, will be a milestone in ecotourism development in Cameroon. This to him, will go a long way to induce the socio-economic development of the area and new community forestry businesses will also be developed.

Prior to the signing of the convention, an application for the creation of the Community Forest was deposited at the Divisional Delegation of MINFOF by the local community, requesting the allocation of 4874 hectares for a community forest. The documents were evaluated and transmitted to the Regional Delegation, who forwarded it to the Ministry. At this level, coordinates for the proposed community forest, endorsed by the National Institute of Cartography, were inserted into the official information system of the Ministry. This was to ensure that the portion of forest requested by the community does not overlap with other titles already issued by the Ministry.

Haven successfully gone through this stage, the Unit in Charge of Community Forestry at MINFOF prepared the Convention and transmitted to the local community, which was signed by a legal entity (President of the CIG) confirming that the coordinates were in line with what they asked for. After the signing, the convention was then dispatched to the Minister for final signature. 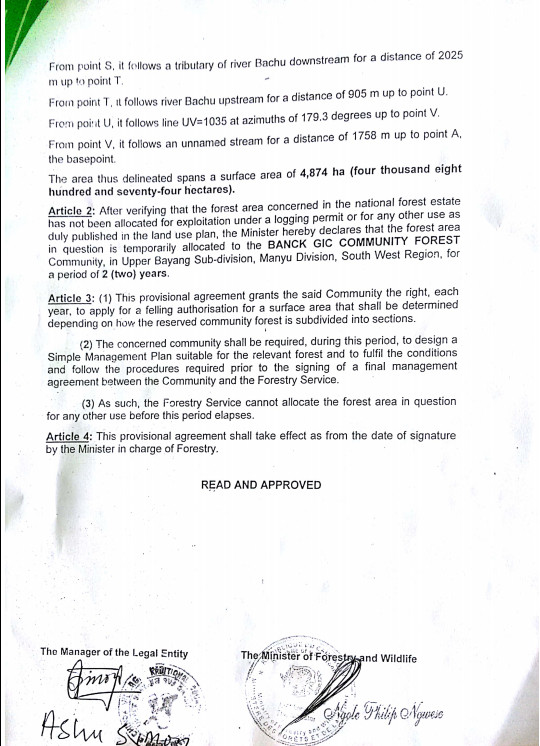 [/one_half]The initiation of the community forest creation process, according to ERuDeF’s Director of Forestry, Deh Nji, was a culmination of information and awareness meeting; participatory mapping; putting in place of a management committee in the form of Common Initiative Group (CIG); and the organisation of consultation meetings.

“It’s only after these activities with the communities that they proceeded to compiling and submitting the application files for a community forest to MINFOF,” he added.

The ERuDeF Forestry Director however noted that the organisation is equally facilitating the creation of 3 other community forests in line with the Tofala-Mone East Corridor Rainforest Community Conservation Project.

After the signing of this two-year provisional management agreement, the Coordinator Tofala-Mone East Corridor Rainforest Community Conservation Project, Floribert Assongacap Assongna, said the next step will be to conduct multi-resource inventory of the area. After such an inventory, according to him, a simple management plan will be prepared and submitted to MINFOF for the final management agreement (convention). He hinted that the implementation of the simple management plan will only come after validation and approval of the final agreement by MINFOF.

Meanwhile efforts are underway to create three other community forests and update of the management plan of the FMU11002. The realisation of this will result in the protection of over 45,000ha of pristine forest between the Tofala Hill Wildlife Sanctuary and the Mone Forest Reserve. This will contribute towards the long term protection of the over 630,000 ha in the Lebialem Highlands Conservation Complex.

Two years after the launching of the Tofala-Mone East Corridor Rainforest Community Conservation Project, communities are able to take independent action in the management of their community forest. This is thanks to sensitisation and training on resource mapping using various modern technologies by ERuDeF.

Also, 4874 hectares of forested land hitherto being sold for cash crop production have been rescued for conservation. Wildlife habitat has equally been secured and will lead to increase inbreeding and species population in the long run, especially when the corridor creation process will be completed.

Meanwhile there has been a great improvement in land use planning in the form of agricultural development, forest resources management and the prevention of landslides caused by deforestation. The project has also strengthened communities in their campaigns and lobbying against palm oil plantations. In addition, the project has positive effects in stimulating community cohesion because it gathers people to share information and concerns and come up with new solutions that benefit all members of the community.

The creation of the BANCK Community Forest has been successful thanks to support from international partners like the New England Biolabs Foundation, and the African Conservation Foundation, and general supervision from the Ministry of Forestry and Wildlife.