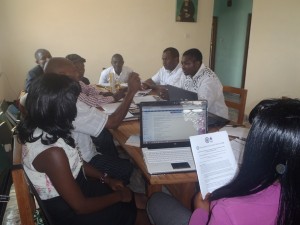 The Ministry of Forestry of Wildlife through its SW Regional Delegation has drawn up an anti-logging strategy to curb the extinction of threatened trees species within the Mt. Cameroon forests.

The meeting which took place on Monday, December 16, 2013 at the ERuDeF Institute of Biodiversity and Non-profit Studies, IBiNS, campus, Mile 18, brought together stakeholders from the Regional Delegation of Forestry and Wildlife, ERuDeF and members of the local communities including Bova, Bafia, Bakingili and Bomana.

The decision comes after a team of foresters from ERuDeF, during one of their patrols sometime in August 2013, watched with dismay as tons of the threatened species zebra wood (Microbelinia bisulcata) were sawn and transported out of the Mt. Cameroon forest area.

Demand for zebra wood soared in the Cameroon timber market following a ban by government on the highly sought Bubinga species (Guibourtia mannii).

Villagers in the Mt. Cameroon area told The Green Vision that illegal logging of timber species from the area has increased to frightening levels.

They said loggers invade the forest at midnight and haul tons of wood from the forest.

Sources reveal that in the last two to three years, a cubic metre of Bubinga sold at a whooping 1.5 million frs cfa in Douala.

This brisk business almost led to the extinction of the species in the Mt. Cameroon area, causing government to ban its exploitation.

Regional Controller, Biakiay Nobert, said carrying out patrols and anti-logging has been part of their duty at the Ministry of Forestry.

“We have the manpower and technical knowhow to carry out patrols and track down illegal logging. It is true there is a lot of deforestation going on in the Mt. Cameroon forest. At the level of the Ministry of Forestry, we have been doing patrols to curb the rate of deforestation. The coming in of ERuDeF will help beef up our capacity and help to make our patrols more regular.” The Coordinator of ERuDeF’s Mt Cameron Threatened Trees Project, Asa’a Lemawah, said it was imperative that ERuDeF in collaboration with the Ministry of Forestry act fast to curb the situation.

She explained that the rate of encroachment especially in forest reserves such as the Mokoko Forest Reserve is due to increase in population and the search for livelihoods.

Asa’a equally blamed the disappearance of these threatened trees on the vast expansion of the agro-industrial company, the Cameroon Development Corporation (CDC).

The team, therefore, resolved to increase village to village sensitization in communities living within the Mt. Cameroon area and also in the media; work closely with the village management committee for them to mediate between their communities and ERuDeF/MINFOF and reduce illegal exploitation of the threatened species.

It was also resolved that there would be more regular patrols by the MINFOF team, which would also take GPS of where seizures are noted so that patrols could be intensified in such areas.

In addition, impromptu patrols will be conducted in forest reserves so as to take illegal loggers unawares.

A recent survey demonstrated that the trend in demand especially by the Chinese has moved away from Bubinga to Microbelinia bisulcata commonly known as Zingana.

Remnants of Zingana found in the Mokoko Forest Reserve and adjacent forests are being extracted wantonly to make up for this gap.