Chimpanzee Population On a Rise in the Tofala Forest 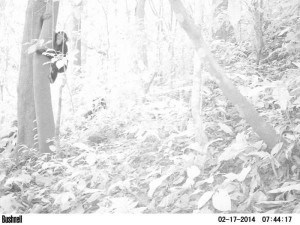 A German Researcher has said the presence of many baby chimpanzees captured in camera traps in the proposed Tofala Hill Wildlife Sanctuary is an indication that chimpanzee population is on the rise in this Forest. Sebastien Linarz was speaking on May 30th, 2014 at the ERuDeF Institute of Biodiversity and Non-Profit Studies (EIBiNS), Buea during his send forth ceremony, after completing the first phase of his PhD Research at the Institute.

In a speech, the President/CEO of ERuDeF, Louis Nkembi, thanked Sebastian for choosing ERuDeF to carry out his research pledging the Institute’s total support for the project.

Sebastian Linarze on his part expressed utmost gratitude to the staff of ERuDeF and EIBiNS for the hospitality and high sense of professionalism exhibited during this phase of the research.

He said his desire to enroll into the EIBiNS Post Graduate Research Programme (PR) in January 15, 2014 was to carry out a carry out a research on a “Comprehensive study of the ecology and behavior of Cross River Gorillas and Nigeria-Cameroon Chimpanzees in the Lebialem Highlands in Cameroon”. This was instigated by the quality of research, which he saw ERuDeF carried out through its Institute during his six-week-volunteering with the organization in 2012. A research, which according to the German, was motivated by his interest in the Nigeria-Cameroon chimpanzees and Cross River Gorillas given their ‘closeness’ to man, and his desire “to prevent the extinction of these two unique species of global importance and to know more about their way of life”

Under the technical supervision of Professor Joyce Kimbi, the German researcher together with his field supervisor, Ms Asoh Bedwin, who doubles as EIBiNS’ Research Coordinator, spent 6 months in the Tofala and Mak-betchou forest blocks in the Lebialem Highlands, collecting data for the first phase of the research work.

With the aid of a field guide in each of these blocks, Bedwin and Sebastian, set up camera traps, carried out a day-to-day biomonitoring of these apes in Tofala and Mak-betchou recording various signs like feeding signs, nests etc and collecting hairs and dung samples for the genetical analysis.

At the end of this phase of the project, this researcher was thrilled with the kind of information registered. “We were marveled by the images we saw in the camera traps we set. For the first time, an image of a cross river gorilla was gotten on camera including different groups of chimpanzees; both young and old as well as many with babies. Many other animals like duikers, some cat species, squirrels and Preuss monkey were captured. I also discovered that chimpanzees like moving on the tracks but gorillas avoid the track” the PhD researcher said.

Then that unforgettable day; “It was Monday evening; we had just come back from hiking and were resting when all of a sudden we got chimpanzees coming down the mountain, probably to make sleeping nests close to our camp. We decided to go and look for them. When we reached the place, it was already dark. The light of our flashlights indicated our presence. Suddenly there was panic in the group. Chimpanzees were shouting all around us. They were so afraid, that they started to pee down the trees. While some of them climbing down and ran away, others instead climbed up and hit in trees. We spotted one chimpanzee with the flashlight far up the tree. The next day we returned to the nest sight and saw 10 nests, which we tagged to determine the decay rate” the PhD student narrated.

The German researcher with the supervision of the EIBiNS Research Coordinator, collected leave samples from the nest and with the aid of a “liquid” also collected dung and hairs of gorillas and chimpanzees.

At the end of the first phase of this research, the German Researcher disclosed that the dung collected will be taken to Germany and analysed to determine the diet of the two primate species and their food composition while the hair will be used to determine the genetic flow between the gorillas in the proposed Tofala Hill Wildlife Sanctuary and those of the Mak-Betchou forest (now being proposed as Mak-Betchou Chimpanzee Sanctuary. The leaves collected will aid to determine the various species which these two primates use to build their nests.