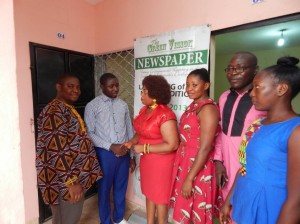 [/one_third]The Interim Fako Divisional Delegate of Communication Mrs Olive Ejang Ndumea extolled The Green Vision Newspaper (GVN), a publication of ERuDeF Media Division, for its role in informing and educating the people of Fako Divison and Cameroon at large on key environmental issues.

Speaking, February 8, 2018, during her maiden visit to GVN, Mrs Ndumea implored the Cameroon’s leading environmental newspaper not relent efforts in investigating and reporting on key environmental issues by companies, corporations and others in and around the Division

In her key note address the Fako Communication Delegate congratulated GVN journalists and Management on their priceless services to humanity reminding them on the need to uphold key journalism ethics and principles like truth and accuracy, independence, fairness and impartiality, humanity and accountability in the exercise of their function. She disclosed that her goal for 2018 is to equip journalists in Fako with skills on Crises Reporting and Peace Building and Election Reporting.

Officially welcoming the Divisional Delegate, GVN’s Editor-in-Chief gave the background/historical evolution of the paper, the governance structure and staff strength, vision, goal and objectives, achievements and areas of coverage of the paper. He also presented key challenges facing the paper including epileptic readership & sales, lack of adverts & press releases from private and state corporations/institutions, difficulty in GVN distribution with the gradual departure of MESSA PRESSE and lack of access to information from private and state corporations/institutions. The Editot-in-Chief recommended that the Delegation mediate for easy access to information as well as enlist GVN in the coverage of key national events within the Division. He equally presented other sister publications of GVN like the Impact Magazine, Cameroon Biodiversity Business Newsletter, A-GSAC Newsletter and centres like the ERuDeF Centre for Environmental Film Making and Photography & ERuDeF Centre for Environmental Information Management.

The Delegate was also introduced to the operational mechanism of GVN from news gathering, editing, layout, printing, parceling & distribution and archiving. During this session, the 2016 GVN annual and latest GVN editions, were handed to the Delegate and her team.

The Fako Communication boss express the availability of her Delegation to help GVN realise her goals in the Media Landscape of Cameroon.

Mrs Ndumea Olive Ejang was appointed last December 5, 2017, as Interim Divisional Delegate of Communication, Fako. Her visit to GVN was part of her media tour within the Fako Division to know and be known by media houses within her area of jurisdiction. She was welcome to GV by GV Editor-in-Chief, Ndimuh B. Shancho; Editor, Fonki Yanick Assistant Editors Joyce Mbong & Melvis Takang, Reporte, Ngome Emmanuel and ERuDeF Director of Administration and Human Resources, Charles Tangie