Communities Use Forest Watcher To Detect Deforestation In Upper Bayang 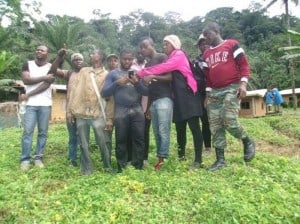 Forest Watcher is the Global Forest Watch (GFW)’s application, which helps in the determination of the cause(s) and intensity of deforestation and degradation. The Environment and Rural Development Foundation (ERuDeF), with the support of GFW, recently installed this app in smart phones of community members in the Upper Bayang Subdivision. With the application installed, community members were able to determine the exact cause and intensity of deforestation and forest degradation in and around their community forests.

The application accurately directed the local community members to deforestation and forest degradation sites by indicating the exact distances and directions of the sites.

Meticulously, following the direction indicated by the Application in the smart phones, community members during the forest monitoring process were able to locate different deforestation and degradation sites in their community forest area and identify the cause of the deforestation or forest degradation.

Agriculture for instance was reported as the principal cause of deforestation and forest degradation in some seven communities in Upper Bayang sub-division after a community-led forest monitoring process carried out by some community members in Etoko, Chinda, Kendem, Egbemo, Bakumba and Ayukaba.

Transferred on the participative 3 dimensional model (P3DM) map, it will serve as a platform to all stakeholders, for communication and management of the community forest land.

Given that remote sensed data does not actually give information about what is happening on the ground (the cause of deforestation), the data collected and validated by the local community members have helped upgrade GFW data by ground truthing.

While GFW uses satellite images as their eyes on the sky, the community members are thus serving as the eyes on the ground.

The Forest Watcher Application came within the framework of a project co-supported by Global Forest Watch aimed at providing long term conservation to the unique biodiversity of the tropical forest of Upper Bayang through a community and municipal collaborative management approach, involving the local communities, the municipal government and the Ministry of Forestry and Wildlife in the long-term management of this forest corridor.