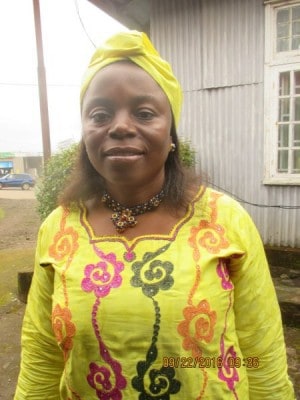 The Senior Director of Finance and External Operations of the Environment and Rural Development Foundation (ERuDeF), Mrs. Ursula Nkeng, has been appointed pioneer Chief Operation Officer (COO) of ERuDeF. Her appointment was made public by the President/Chief Executive Officer of the organization, Mr. Louis Nkembi, at the start of ERuDeF’s Annual Review and Planning Meeting, early January, 2017.

This appointment according Mr. Nkembi, is a step towards ensuring the realization of the organisation’s long term sustainability and expansion vision.

“We are anticipating that within the next 10 years we should have effectively put in place the structure that will permit the long management of the organization. It is within this perspective that the Board of Trustees recently put in place the position of the Chief Operating Officer to directly assist the CEO in the management of the organization” the ERuDeF boss expounded.

The ERuDeF President/CEO said Mrs.Nkeng’s dedication to the organization and high sense of assiduity since 2008, won the admiration of the Board of Trustees, who consequently appointed her the Pioneer COO of ERuDeF.

This position has been greeted with lots of joy by Mrs. Nkeng Ursula, who promised to meet up with the challenges.

“I am very impressed and lack words to express my joy. This shows that my nine years of service to this organization is yielding fruit. Being a new position at ERuDeF, it’s going to be very very challenging given that I will be the one to lay the foundation of this position and the stability of the organization will depend on the foundation” she said.

The pioneer COO, has a vision for the organization. “My vision is to see to it that the organization extends to other parts of Africa. This means identifying focal persons within the organization for each prospective site/country, organizing meetings with focal persons and prospective partners, building and developing ideas on possible projects and expansion strategies. I will in collaboration with the CEO lobby other international organizations to partner with ERuDeF so that ERuDeF can grow in future to be like WWF, WCS and FFI amongst others; it will grow beyond just receiving funds from international donors to a point where it can be able to fund other younger NGOs in the country” Mrs. Nkeng promised.

The newly appointed COO said she will in the weeks ahead meet with all departments within ERuDeF to get their respective challenges in term of project implementation and staff welfare given that the success of the organization depends on staff’s welfare and stability.

Mrs. Nkeng promised ensuring the strict respect of the organisation’s internal policy and the appropriate remuneration of staff.

“I will review the organisation’s internal policy; distribute to every staff and follow up to ensure that they understand and abide by it. I will also make sure that what is due each staff is given them in term of compensation and pay package” she said.

The pioneer COO pray that God gives her wisdom, inspiration and strength that will make her withstand the challenges and make ERuDeF grow from strength to strength.

Ms. Nkeng Ursula is undertaking an MBA in Business Administration. She is a graduate with Bachelor of Science (BSc.) in Banking & Finance and a composite minor in Management, Accounting and Economics. She was recruited into ERuDeF in July 2008 as the Finance Officer. In 2014, Ursula was promoted as the Director of Finance and Budgets and in 2016 she was promoted to the position of Senior Director of Finance and External Operations, a position she’s been holding till her recent appointment.