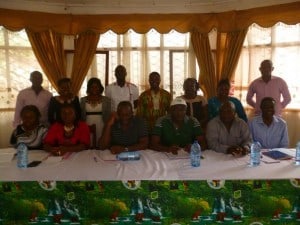 A Workplan outlining activities that will speed-up the elaboration and validation of a Management Plan for the Tofala Hill Wildlife Sanctuary (THWS) has been instituted. It was established, Saturday February 18, 2017 during a meeting grouping stakeholders charged with the setting up of ground works that will eventually see the institution of the plan. The stakeholders constituted socioeconomic and forest technocrats from the Southwest Delegation of the Ministry of Forestry and Wildlife (MINFOF-SW) and the Environment and Rural Development Foundation (ERuDeF).

According to the Workplan, the technical team will carry out production of detailed mapping, micro-zoning, socioeconomic, cultural and scientific studies, as well as come out with the situational analysis of the sanctuary. All the studies will be submitted to MINFOF-SW, and ERuDeF. The studies will all be assembled and a draft management plan established. Thereafter, a letter of preparedness will be sent to the Minister of Forestry and Wildlife (MINFOF). The months of March and April 2017, were set as deadlines for all the activities in the Workplan to be carried out.

During the meeting, participants were served with four presentations x-raying the socioeconomic, cultural and scientific potentials the sanctuary possesses. The presentations included a write-up on the administrative process and procedures for the development and elaboration of management plan in Cameroon, wildlife studies, sensitisation, and conservation education around local communities, in the Wildlife Sanctuary, socioeconomic studies in the Lebialem Hills complex, amongst others.

Speaking at the end of the meeting, the Southwest Chief of Wildlife and Protected areas, Mr Nono Joseph, called on the stakeholders charged with different functions in the Workplan to be assiduous, steadfast, and committed to the assignments. He expressed his readiness and that of his ministry to be at the forefront of every tasks that will eventually lead to the realisation of the Workplan. For her part, the Chief Operating Officer of ERuDeF, Mm Ursula Nkeng, stressed on all to respect the deadlines assigned so everything will go as planned. She indicated that the administration of ERuDeF will put all necessary resources together so the Workplan could be realised.

The meeting ended with all participants promising to work in their different field so by the end of March 2017, all technical activities must have been carried out.