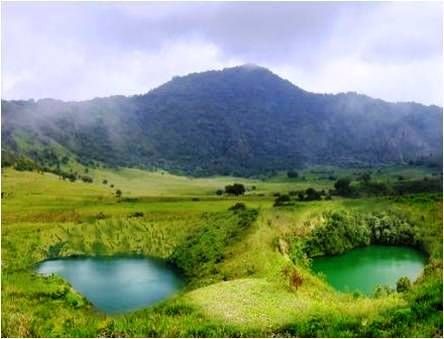 Mount Kupe is a plutonic mountain in the western high plateau of Cameroon. It is the highest of the Bakossi Mountains, rising up to 2,064 meters (6,772 ft). Aside from its rich biodiversity, Mt.kupe is blessed with a total of 4 watersheds; River Manyu, River Nkam , River Moungo  and River Woun watershed. This richness in diverse water sources is also portrayed in the presence of numerous streams, springs, rivers and the beautiful twin lake of Mount Kupe Maunaguba with its unique features; the shape of the African map with its blue and green colors this lake was named twin lake by Kupe Muanenguba local communities, the female lake being for domestic uses while the male been for ancestral purposes and a touristic site. The Bakossi National Park serves as protection for these various watersheds. Its highest peak, the Muandelengoh (1895 m), stands towering near the Muandelengoh, Ndun, and Mualong villages south of the Mbwe valley, and is very noticeable from Bangem. The park holds a high flora and fauna biodiversity, with a high rate of endemism. The sacred forests and groves belonging to the local people but situated in the National Park have a significantly higher plant species diversity than the nearby Mount Cameroon.

This rich water source mountain is a unique hotspot for many primate species, including the Drill (Mandrillus leucophaeus), one of the most endangered primate species in the world, and the Chimpanzee (Pan troglodytes). Other primates include Preuss’s red colobus, Red-eared guenon, Preuss’s guenon, Putty-nosed monkey, Mona monkey and other important mammals like Blue duikers, Red river hog, Red-fronted duiker, Black-fronted duikers, Sitatunga, and Long tail pangolin.

Over the years this one’s rich afforested mountain has experienced deforestation due to shifting cultivation, logging of wood for timber, and expansion of human settlements and establishment of pasture lands. Every side of the mountain has been steadily converted to agricultural use. Forests have been cleared up to 1,500m on the eastern slopes and up to about 750m and 1,100m on the western and northern sides, above the villages of Mbule and Nyasoso. As of 2010, there was still primary mid-altitude and montane rainforest on the northern side. However, the beauty of its water sources remains outstanding and are treasured by the Kupe Muanenguba community.