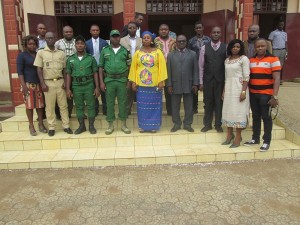 [/one_third]The draft Technical Note for the proposed Mount Muanenguba Integral Ecological Reserve (IER), has been developed. This document, which officially seeks the government authorisation for the transformation of the site into a protected area, was produced during a workshop at the Southwest Regional Delegation of the Ministry of Forestry and Wildlife (MINFOF), the Environment and Rural Development Foundation (ERuDeF), and the Cameroon Herpetology-Conservation Biology Foundation (CAMHERP-CBF).

The workshop which saw the development of the Technical Note, was a culmination of a workshop that took place a few months ago in the Moungo Division of Littoral Cameroon inducing the production of the draft Technical Note.

Meanwhile, the draft Technical Note captures information relating to the physical, biological, socio-economic and demographic characteristics of the area.

Speaking in one of the workshops for the development of this document, the Southwest Regional Chief of Services for Transformation and Control, George Bidima Antione, representing the Southwest Regional Delegate of MINFOF underscored the importance the significance of transforming Mount Muenenguba into an Integral Ecological Reserve.

“This area was earmarked based on its rich biodiversity and also because of the empirical role it plays in the regulation of water in Littoral and South West regions. Mt Muanenguba is a water shed for the river Moungo and Wouri. Converting this area into a protected area is a way of meeting up with the governments objectives that of protecting about 30% of forest land. If this project is appreciated and validated by hierarchy, the living standards of the local communities will improve via alternative livelihood activities,” he expounded.

Corroborating George Bidima, ERuDeF’s President/CEO, Louis Nkembi, noted that if this site is not protected, in the nearest future, we will have taps in town but they will not be running. He disclosed that the mountain is a site for cultural rite by the Mbo and Bakossi that if not conserved, will also disappear.

The ERuDeF boss hinted that if the process goes through successfully, then Mount Muanenguba will be the first protected area focused on the conservation of amphibians.

With the draft Technical Note now available, the next step will be to validate and submit the Document through the Regional Delegate of Forestry and Wildlife for Littoral & Southwest to the Minister of Forestry and Wildlife. If no objections, the minister will sign in into decision and publish a Public Notice, which will constitute the first level of Government’s recognition that a certain portion of her land has been set aside for a creation of a protected area.