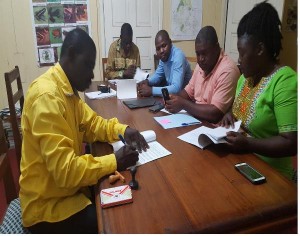 The Tinto Clan Community Forest (TCCF), Manyu, Southwest Cameroon, has put pen to paper for a second time, with World Agroforestry Centre (ICRAF). The solemn ceremony that took place recently in Buea, comes on the heels of multiplied efforts in the production of Bush mango ( Irvingia gaboneses) at industrial scale.

Signing on behalf of TCCF, Tabi Ferdinand, the Forest Management Officer (FMO) said members of his community forest are resolute in producing large quantities of the Non-Timber Forest Product (NTFP). He indicated that his team were gainfully occupied in the first phase of the project, hoping that the second phase brings good tidings.

“I am overwhelmed as my community is the first CF in the South West Region to have benefited from such a wonderful project. I promise to work together with my team to produce social, economic and environmental benefits for the community. All will be put in place before the Bush mango season came June 2018,’’ he added.

Speaking also during the ceremony, the President and Chief Executive Officer (CEO) of ERuDeF, Louis Nkembi, urged the FMO to manage the resource properly and formulate mechanism to roll out mismanagement of funds. He indicated that if this enterprise is managed in the right manner, the community will witness great development in the shortest possible time. In addition, it will attract more donors into the community.

To achieve this, the community will employ 6 groups of 10 people among which will be collectors, crackers and extractors.

Summarily, at full capacity, the CFE will produce 5000 dry Bush Mango kernels, spend about 7500 FRS on a sack and sell at an average price of 20000 FRS.

With available labour and finance to exploit this resource it can be very lucrative business venture. The contract signed with ICRAF will just came to make this a reality.

The TCCF is the first community in the South West Region to benefit from Dryad funding. A contract worth 23 million was signed earlier in August between the TCCF and ICRAF facilitated by ERuDeF. And recently a 2 nd one worth 18 million was signed for the Bush mango enterprise.

The Dryad Project seeks to reduce deforestation, improve environment, and improve social welfare of participating communities and also to create economic resilience. The project is aimed at provided financial and technical support to viable CF to enable them improve on their social and economic status as well as ensuring the health of the forest.

The projected is being facilitated by ERuDeF, with funds from World Agroforestry Centre (ICRAF).