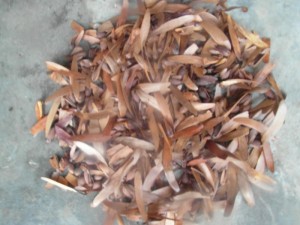 A team of Foresters from the Environment and Rural Development Foundation (ERuDeF) have collected over 240 seeds of the threatened Lophira alata tree from the Lilale and the Likoko forests in the Mt Cameroon area. The seeds collected in April 2014 have been nursed in ERuDeF’s central nursery located in Buea. The collection of these seeds was very exciting to the team given that since the identification of this particular species in previous surveys, seeds were never found but during this latest survey in April, they were identified and collected. This period was therefore noted as the fruiting period of the species and henceforth, forests of these areas will be surveyed for the Lophira seeds collection. After propagation in the nursery the seedlings will eventually be distributed to communities to plant them in their respective forests as well as seedlings of other threatened trees.

While in the forest, the team found it a little tricky to distinguish the Lophira seeds given their brownish nature as leaves in the forest floor. They were also difficult to be distinguished from those of the threatened Entandrophragma angolenses due to the leaf-like structure on it. However, the round-seeded nut at the bottom clarified doubts and the seeds were distinguished and picked.

The Lophira alata species is a threatened species of plant of the Ochnaceae family. It is found in Cameroon, Congo, Gabon and Nigeria and has been widely exploited mostly for its wood, particularly in Cameroon, Equatorial Guinea and Gabon due to hardness of its wood and larger volume than other woods.

Also the wood is being used for construction work such as hydraulic works, marine construction, bridges and staircases owing to its resistant properties. From a traditional standpoint, experts say the bark extracts of this plant are used as a cure against menstrual/kidney problems, headache and stomach problems. However due to the very high level of exploitation in its areas of distribution, it has been classified as ‘vulnerable’ by the IUCN Red list.

In Cameroon, primary populations of Lophira alata have disappeared since the 1950s and 1960s. Most of the landscapes which harbored these plants are degraded or have almost disappeared completely as a result of human activities in the tropical forests.

In an effort to restore this species and other threatened tree species, ERuDeF in partnership with the Ministry of Forestry and Wildlife has been collecting the seeds of such plants in the Mount Cameroon area to propagate and later replant in the forest in order to replace these globally protected species.