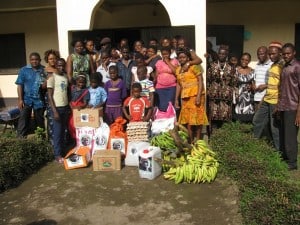 Within the frame work of their Give Back to the Community Initiative, staff, associates and members of the Environment and Rural Development Foundation alongside some media men and women have donated material gifts to the orphans of Roots for Kids Orphanage at Bokova, Buea.

The ceremony that took place at the Roots for Kids Orphanage in Bokova, on Friday March 28 2014, brought together some 17 orphans of Roots for Kids alongside their Management.

Speaking on behalf of the President of ERuDeF, the Director of Administration, Ms. Ita Nawom said even though giving was one of those things which people found it difficult to do, it was important for everyone to learn how to give, especially to the less privilege. She added that ERuDeF as an organization was only contributing its own little effort, as a means to give back to these orphans in the community. Ms. Ita hoped that others will also copy the initiative of ERuDeF, to help make the plight of the orphans and other under privileged in the community less painful.

While receiving the gifts on behalf of the children, The Orphanage’s Coordinator Mr. Yaya Moses expressed his heart felt gratitude to the ERuDeF team, and the gift they had given to the children. He added that since the orphanage open in 2008, over 70 orphans have passed through Roots for Kids. He added further that so far about 17 orphans live in their premises and raising the children was such a herculean task.

According to Yaya Moses, the vision of Roots for Kids was to see the children grow up to become better people in life, than their parents who abandoned them. They hope to give the children a proper education so as to prepare them for a better future. He added that some of the activities at the orphanage consisted of feeding the children, sending them to school, ensuring that they sleep on time after doing their home work.