ERuDeF installs yet another Palm Oil Mill in Bechati village 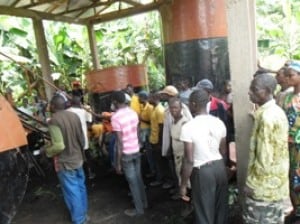 In an effort to continuously divert the attention of the villagers living adjacent to the forests of the Lebialem Highlands and conserve the last great apes in the Lebialem Highlands, the Environment and Rural Development Foundation (ERuDeF) has installed another diesel run palm oil mill in the Bechati village. The event which brought villagers from every nook and cranny took place on Friday April 19 2013. The oil mill comes three weeks after another diesel run mill was installed in neighbouring Essoh-attah. The industrial palm oil mill with an average daily capacity of 2,000 litres of crude palm oil is designed to process both local and cheated nuts with the aim of improving on the income level and thus living standard of this forest adjacent community.

This mill it would be recalled represents an alternative source of livelihood for the people of Bechati whose village form a significant portion of the proposed Tofala Hills Wildlife Sanctuary in the Lebialem Highlands, Western Cameroon. It is hoped that with this would divert the attention of villagers from hunting or farming in this proposed sanctuary which hosts some 40 critically endangered Cross River Gorillas and over 150 endangered Nigeria-Cameroon Chimpanzees.

The installation ceremony was attended and supported by a cross section of youths from the village, who promised to take care of the mill and make better use of it. This mill has the ability to increase palm oil yield by about 50%. This implies that the people of Bechati will have more oil than in the past as one of the villagers explained ” In the long run, I don’t think there would be need to expand palm farms since small farms can give us large harvest. Equally, we have already signed conservation agreement not to intrude into forest so as to receive benefits such as the mill. I believe with such a mill in addition to other livelihoods like pigs and bee hives we have been provided we can help preserve these last species of Cross River Gorillas” the indigene concluded.