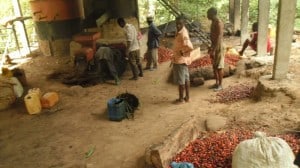 The Environment and Rural Development Foundation (ERuDeF) has launched the business phase of the of the palm oil project. The palm oil project which was launched in 2011 entered this new phase in March-April 2014.This new phase envisages the production and marketing of at least 6,000 liters of crude palm oil within one month. The organization has equipped palm oil mills in forest adjacent communities such as Mak-Betchou area with necessary materials to support this operation. This business phase of the project would impact on the local economy of Mak-Betchou estimated at an 200% impact.

In an interview with the Development Chairman of Abebue community in the Essoh-Attah, Fondom, Mr. Boniface, he said “the palm oil project has transformed our community into a city where almost everything has become available and movement of goods and persons more free”. He said thanks to the launching of this operation, prices of palm oil, which is the mainstay of villagers and the most locally traded commodity almost doubled due to increase in demand.

The boom in business has also led to improved living standards of average palm farmers as the Fon of Essoh-Attah His Majesty Fon Foreke Valentine admits, “my people have confessed to me that the mill is actually helping them. They carry out their activity now with less stress and an increase in their income has improved their lives and they can provide their children with necessary education materials, afford medical bills and feed better”.

This was an experimental process lasting just one month and with more resources from other friends of ERuDeF and partners, it is hoped that the lives of the population would be improved upon.

Fon Foreke used the opportunity to challenge his subjects in a meeting with the management committee of the oil mill on April 26, 2014 to continue to support the operation while keeping aside selfish interest and working for the good of the community.

A vehicle to transport palm oil to the lone proxy urban center of Dschang, has equally helped to relieve villagers who found it very difficult trekking for 8hours to Dschang carrying palm oil on their heads.