ERuDeF Trains 14 People on the Cultivation of Echinops giganteus 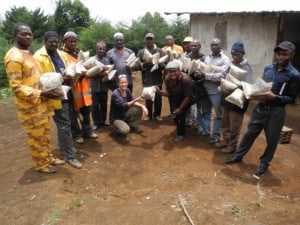 The Environment and Rural Development Foundation (ERuDeF) under its Echinops giganteus project has trained 14 people on the different steps involved in the cultivation of the echinops plant. The training took place in Magha-Bamumbu on March 25 2014. The ERuDeF team started with the general presentation of the Echinops giganteus

The trainees were told the plant in Cameroon is indigenous to the Mt. Bamboutos area where it is regarded as a wild weed. They were taught that in order to grow this plant, they have to plough their land and plant the seeds without any pre treatment.

Farmers were told that the harvesting of the roots is done after two years when they are mature. Still with the purpose of conserving nature, during the training farmers were told to avoid the use of herbicides which can be harmful to the plant and the environment.

The Farmers expressed satisfaction after the training and thanked the ERuDeF team for giving them free grains of the echinops plant to propagate. Farmers were given seeds according to the size of their farms with some going home with up to 15 kilograms of seeds. At the end, approximately 150 Kilograms of echinops grains were shared out to farmers who would propagate during this rainy season. The team equally advised farmers to plant strategically in order for echinops not to compete for space with the production of food crops. Given that echinops takes about two years to get to maturity, if they plant it on their farms, they will not have space for food crop for two years. This explains why the team recommended them to plant on slopes where they cannot plant crops and also to use the plant for fencing.

It is worthy to note that the overall aim of donating these seeds to farmers is to permit them grow this plant and be able to sell the roots which has pharmaceutical and essential oil properties to enterprises, thus generating income for themselves at the same time valorizing this natural resource.